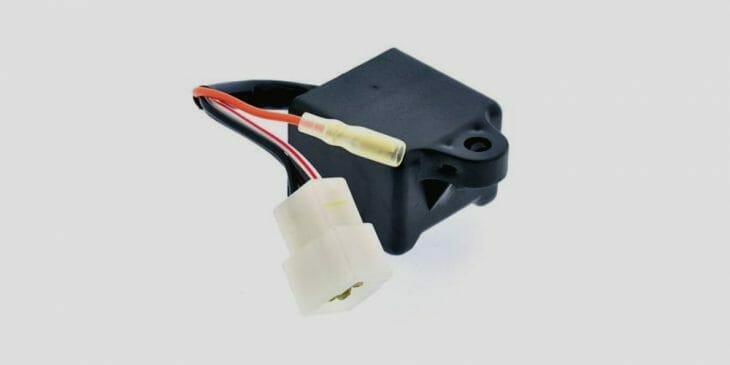 In General, to test a CDI box with a multimeter you must: Keep the CDI still connected to the stator. Measure using the stator end instead of the CDI end. Measure the blue and white resistance; it should be between 77-85 ohms and the white wire to the ground show be between 360-490 ohms.

The Internal Operations of CDI

Before we find out the various ways of testing the CDI boxes, it might interest you to learn about the internal workings of your CDI ignition. Also referred to as thyristor ignition, the CDI stores an electrical charge and then gets rid of it via an ignition box to facilitate the spark plugs’ production of a powerful spark in a petrol engine.

The capacitor charge is responsible for providing ignition. This means that the capacitor’s role is to charge and discharge in the nick of time, creating sparks. CDI ignition systems allow continuous engine runtime as long as the power source has a charge. (1)

Signs of a Faulty CDI

You will need your CDI box and a multimeter with pin leads. Here is a three-step guide for CDI box testing.

1. Remove The CDI Box From The Electrical Device

Let’s assume that you are working on your motorbike’s CDI box.

The CDI unit of your motorcycle is undoubtedly linked to insulated leads and pin connectors. With this knowledge, it shouldn’t be difficult to remove the CDI box from your motorcycle, chainsaw, lawnmower, or whatever electrical device you are working on.

Once you’ve succeeded in removing it, avoid working on it immediately. Leave it to rest for around 30 to 60 minutes for the internal capacitance to release the charge. Before testing your CDI system with a multimeter, it is best to give it a visual inspection. Look out for mechanical deformations that present themselves in the form of damaged insulation from the case or heat. (2)

The cold test method is for testing the continuity of the CDI system. Your multimeter should be in continuity mode before you begin the cold test.

Next, get hold of the multimeter’s leads and join them together. A digital multimeter will produce a beeping sound.

The objective is to ascertain the presence/absence of continuity between all the ground points and the numerous other points.

Determine if there are any sounds you can hear. If your CDI unit is working properly, you shouldn’t hear any sounds. The presence of beeping sounds means that your CDI module is faulty.

The existence of continuity between the ground and any other terminal point means failure of the SCR, diode, or capacitor. All is not lost, though. Consult a professional to help you repair the defective component.

3. Testing The CDI Box Using A Multimeter – The Hot Test

Experts recommend measuring continuity on the multimeter via the stator end instead of the CDI end. It isn’t easy to achieve any test lead connection via a connected CDI box.

The good news is that the continuity, voltage, and resistance are the same as the stator end.

While conducting the hot test, you should test the following;

When measuring the resistance between the blue and white wire, remember to set the multimeter to 2k ohms.

You should be worried if your resistance results aren’t within these ranges and in that case, book an appointment with your mechanic.

A multimeter is a useful tool for accessing and testing the health status of a CDI box. If you don’t know how to use a multimeter, you can always learn. It is not complicated, and anybody can use it to measure resistance and other parameters it was created to measure. You can check our learning section for more multimeter guides.

Confirming that the CDI unit is working properly is critical to the functionality of your motorcycle or any other electrical device. As earlier, the CDI controls fuel injectors and spark plugs and is hence a critical component of the proper functioning of your electrical device.

Some of the things that contribute to faulty CDIs are aging and a faulty charging system.

Working with CDI systems shouldn’t be taken lightly especially if you are unknowingly dealing with a bad CDI. Working with the mechanical aspects of a motorbike and other devices should be done with caution.

Use standard personal protective equipment such as cut-resistant and water-proof gloves and protective eyewear. You don’t want to have to deal with the injuries linked to electrical equipment for failing to observe safety measures.

While the capacitance and the active components inside a CDI box are minimal, you still need to practice caution.

The above two approaches to testing the CDI boxes are effective and practical. While they are different even in terms of the time taken (especially because one technique requires the removal of the CDI box), you can choose which one you will feel the most comfortable with.

Also, you need to analyze the outcome as what you do next depends on your analysis. If you get it wrong, for instance, if you fail to recognize an existing problem, the issue will not be resolved quickly.

Delaying required repairs could cause further damage to your DCI and the interconnected parts and generally ruin your experience with your motorbike, lawnmower, scooter, and so on. So, make sure you get it right. Don’t be in a rush. Take your time!