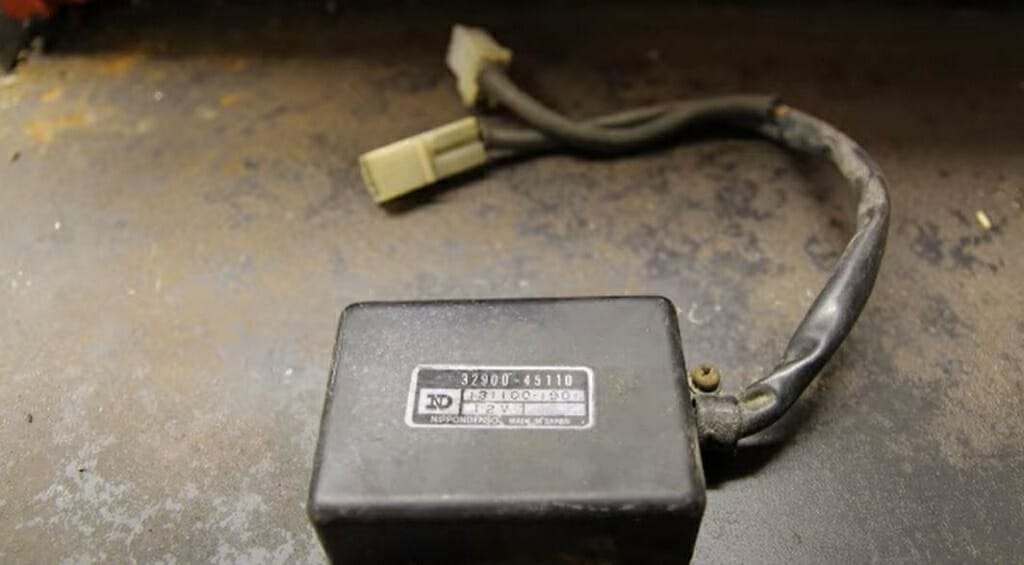 The CDI box is one of the main components for diagnosing and repairing a motorcycle. Accordingly, knowing what a CDI box does will help you greatly with a DIY repair job. Today, I hope to cover everything I know about this mysterious black box.

Don’t forget to read the below article for a detailed explanation.

Working Principle of a CDI Box

A CDI box, aka capacitor discharge ignition, is a significant part of modern motorcycles. This box is a part of most motorcycles created after the 1980s. Before explaining what a CDI box does, here are a few familiar names for CDI boxes.

As you can see, there are a few different names for the CDI box. Try to remember those names too. It will come in handy while you are working with different types of mechanics or clients.

What Does a CDI Box Do?

The CDI box controls the bike’s ignition system. It has capacitors that are capable of working as batteries. So, they can store energy and release that energy for instant ignition. You can recognize this system as a trigger mechanism. This trigger mechanism includes internal circuits, coils, and capacitors. Here is how the CDI box works.

Why Firing Spark Plugs at the Right Time is so Important?

You now know the CDI box determines when the spark plug needs to fire. But have you ever thought about why this is so important? If you haven’t, don’t worry about it. I’ll explain it here.

You’ll hear pinging, constant rattling, or knocking when the spark plugs fire at the wrong time. Also, you’ll have a hard time starting the vehicle. In other words, it will lead to cylinder misfires.

Advantages and Disadvantages of the CDI Box

There are advantages and disadvantages to using a CDI box. CDI boxes are far superior compared to early ignition system contact breakers.

Quick Tip: A contact breaker is a mechanical component for ignition performance. This was used before inventing the CDI box. However, because of the wear and tear, using a contact breaker wasn’t the best idea then.

Known History of the CDI Box

Nikola Tesla invented the first-ever capacitor discharge ignition in the 1890s. It was a groundbreaking invention at that time, and afterward, Tesla filed for a patent for his invention.

The Ford Model K was the first-ever vehicle that ran with a CDI box, which was accomplished in 1906. In the 1950s, the electronics CDI ignition system was introduced to the automobile industry.

Proper knowledge of CDI box troubleshooting is never a bad thing. After all, the CDI box is one of the crucial parts of your motorcycle.

On the other hand, motorcycle repair and service costs are ridiculously high these days. So, why not learn a few things about troubleshooting? With that in mind, here are a few symptoms of a bad CDI box.

Don’t Forget: Above symptoms can result from another issue on your bike. For instance, an engine misfire can happen for many reasons, such as a bad fuel pump or faulty spark plug.

So, it is always better to check the parts of your bike first.

If you still get the previously discussed symptoms after all the above parts are working properly, you might be dealing with a faulty CDI box.

Luckily, you can check a CDI box with a multimeter. Here is how you can do that.

Make sure to run the CDI box test before and after troubleshooting.

Quick Tip: You can also test the CDI box while it still connected to the bike.

Your bike exposes to lots of vibration, heat, and other environmental effects while you are riding the bike. Every mile and pothole you cover gives a considerable amount of beating to your bike.

Hence, the life of the black box is a rough one. Because of this, the CDI box’s internal parts might fail without any warnings. For instance, the box might show symptoms such as smoking. So, it might be time to replace the CDI box.

What is the Replacement Cost for a CDI Box?

When dealing with a faulty CDI box, you might do two things. First, you might try to repair it with the help of a professional. Or you might replace the entire box. Hence, knowing the price tag of these CDI boxes will help you immensely.

CDI boxes might range between $30 to $900. In some cases, it might pass the $900 mark. The price of the CDI box entirely depends on the model of the bike, the brand, and the features. Also, you’ll have to pay the mechanic for the replacement.

Quick Tip: CDI box replacement is usually the best option (rather than repairing).

Compatibility is one of the most common issues in CDI box replacement. Sometimes, it might be challenging to find a CDI Box according to your model, make, and year of bike. It will be even more complicated when you try to do it alone. So, always seek professional help for this type of issue.

For instance, an experienced mechanic might know what to do in this situation. Otherwise, you’ll end up wasting your time and money.

What is the Primary Function of a CDI Box?

A CDI box controls the motorcycle’s ignition system. It helps the ignition starting process and combustion process. In other words, the CDI box conveys when to fire the spark plug.

Can I Start my Bike without Black Box?

No, you cannot start the bike without the black box. The black box is the spark control, one of three things the engine needs to run.

Hence, without a black box, the engine won’t start. That means you cannot run the bike.

What are the Parts of a CDI Box?

1. The power supply raises the system voltage to 250 to 600 volts.
2. The current flow to the charging circuit.
3. Then current charges the capacitor.

Where is the CDI Box Located?

Depending on the bike’s model, the CDI box’s location might vary. For instance, some are in the battery box, and some are under the seat.

Yes. Some aftermarket CDI boxes come with all the upgrades and applications. Most often, they will increase the power of your motorcycle. With a bit of good research, you’ll be able to find a powerful CDI box for your bike. (1)

Are CDI and TCI the Same?

They both have the same functionality (controlling the ignition system). However, the CDI uses capacitor control, and the TCI is transistor-controlled. (2)