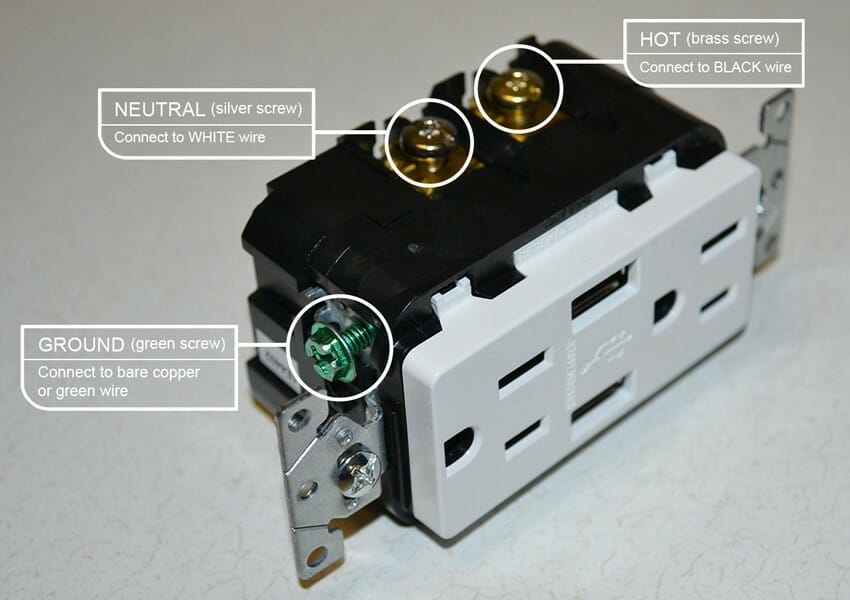 Are you having trouble figuring out which wire goes to the brass terminal on your switch or outlet?

Wiring the brass screw and the silver screw interchangeably can render your switch or outlets inoperable or even jeopardize your electrical appliances; ultimately causing an electrical shock or electrocution. You can prevent such incidents by figuring out which wire goes to the brass screw terminal.

Generally speaking, to figure out which wire to connect to the brass screw. First, know that the brass terminal or screw (also known as the gold screw that is colored black) is the hot or live terminal. Conventionally, black wires are live and should be attached to the brass screw. On the other hand, silver or common screws are neutral. Connect white/neutral wires to the silver screw.

We will discuss more below.

What Color Goes to The Gold Screw?

A live wire goes to the gold or brass screw. But the following exceptions apply:

Neutral Wire in a Single-pole Switch

Do not mind the neutral wire in a single-pole switch because there are two terminals connecting to the live wires. These interchangeable terminals have the same color (Brass).

In the case of outlets, two brass/gold screws connect to the live wires. But you don’t have to attach a live wire to both brass terminals. If your electrical has only one hot wire, attach it to the brass screw and ignore the other brass terminal.

Note: Do not confine yourself to color-code, or expect the manufacturers to use red, black, or white colors to distinguish the wires. For instance, some switches use white colors for the hot wire. In such a situation, even an experienced technician who relies on color-code to identify wire polarity can make terrible mistakes.

What is The Polarity of The Gold Screw?

On Electrical, What Wire Connects to The Silver Screw?

The neutral (usually white) wire connects to the silver screw. That white wire returns current to the breaker panel.

The Polarity of The Silver Screw or Terminal

The silver screw is a neutral terminal because it connects to the white wire, which is neutral. The neutral wire is sometimes colored grey. It is important because it circulates current in the circuit.

However, if you want to make the neutral wire a hot wire, mark it with electrical tape to tell it apart from the neutral connection. That way, you will avoid confusion and the potential disaster of improper wiring.

You should beware that a neutral wire can electrocute someone. But in general, it’s much safer than the live wire or connection.

Another spotlight; do not employ a neutral wire in every single situation. For example, a single-pole switch doesn’t have a neutral terminal. Instead, they have two terminals for the live wire and the ground screw.

On the other hand, an outlet has two silver terminals. But there’s no need to use both if you have one neutral wire.

Common wires go to the common screw. But what are the common wires? They are the white neutral wires that are often tied together in circuits – in the United States and perhaps in your region.

So, when the hot wire carries current to an outlet in a circuit from the main power supply unit, a common wire is needed to ferry that electrical current back to the power source.

You should beware of this practice (bootlegging). It involves the use of the common wire as the ground wire. It is dangerous and I strongly discourage the practice.

The common screw can also bear the name Neutral Screw because the common wires which are neutral attach to it.

You can easily pinpoint the common screw. It is darker than the other screw terminals in a three-way switch – with two screws (same light colors), and a third darker screw.

Step 1: Identify the Nature of The Screws – Hot, Neutral, or Ground

First, you should know the polarity of the screw terminals, as aforesaid: the silver screw is neutral, and the gold/brass screw is hot.

The standard color code for electrical wires is as follows:

In other circumstances, the red wire represents the primary hot wire while the red wire signifies the secondary hot wire. As for the ground connection, green wire or copper conductors can be used.

Step 3: Use a Multimeter Approach if The Color-Codes Technique Is Not Reliable

Some homes have electrical boxes stuffed with wires with different colors such that color-code is not feasible to use to identify which wire goes to which screw. In such a situation, you need to use a multimeter to rule out the polarity of the wires. (1, 2)

Step 4: Connect the Wires to Their Respective Screw Terminals

Then, knowing which wire is positive, negative, or neutral, you can easily connect them to their respective screws. Positive hot wire goes to the gold/brass screw; the neutral wire goes to the common screw.

The Dangers of Connecting Wrong Wires to a Screw

Incorrect wiring reverses the flowing current. In so doing, wrong sections of the electrical appliances will be energized making them vulnerable to electrical shock.

Also, wrong wiring may simply render the outlet dysfunctional. Still, an inoperable switch or outlet can shock you.