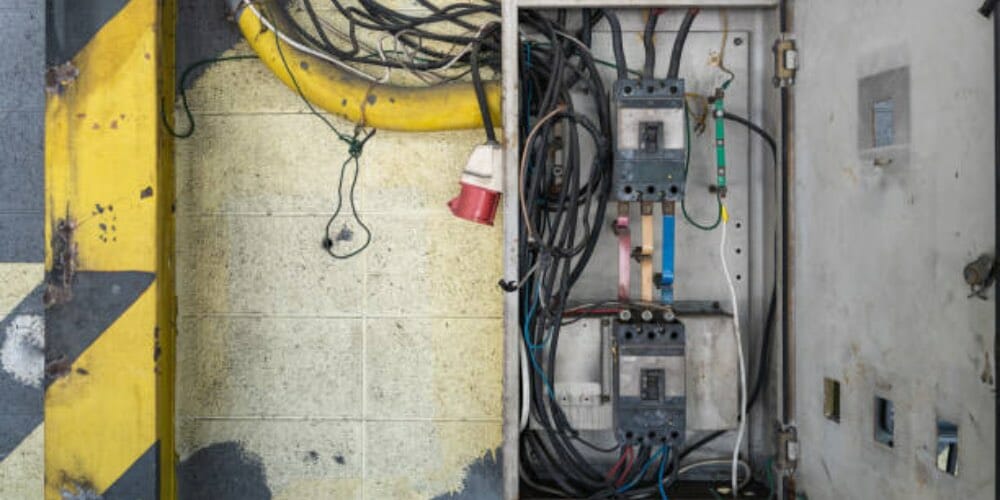 Electricity flows along a circuit, and circuits can be controlled by opening and closing as required.

But sometimes, the current flow might get interrupted, or a short circuit might be created. Also, there are ways we can intentionally control a circuit to make it open or closed. To understand all this, we need to know the difference between an open and closed circuit.

The difference between an open and closed circuit is that a circuit is open when there is a break somewhere along its path, which prevents an electric charge from flowing. It only flows when there is no such break, i.e., when the circuit is completely closed. We can open or close a circuit using a switch or a protector, such as a fuse or a circuit breaker.

I will explain this difference in detail with examples and illustrations before also pointing out more differences for detailed insight.

What is an Open and Closed Circuit?

In an open circuit, electrical current is prevented from flowing through it.

Unlike a closed circuit, this type of circuit has an incomplete path that is interrupted or broken. The discontinuity makes the current unable to flow.

In a closed circuit, electrical current is allowed to flow through it.

Unlike an open circuit, this type of circuit has a complete path without interruption or break. The continuity makes it possible for the current to flow.

In diagrams of electrical circuits, we usually indicate an open and closed part of the circuit by curved brackets and a thick dot, as shown in the picture below.

How a Closed Circuit Opens, and Vice Versa

A closed circuit can become open, or vice versa, for an open circuit to become closed.

How a Closed Circuit Can Become Open

If the current flowing through a closed circuit is interrupted, it becomes an open circuit.

A closed circuit can become open accidentally if, for instance, there is a break somewhere along the circuit due to a broken wire. But opening a closed circuit can also be managed intentionally or by design using switches, fuses, and circuit breakers.

So an initially closed circuit can be opened by a broken wire by turning the switch off if the fuse breaks or the circuit breaker trips.

How an Open Circuit Becomes Closed

If current starts flowing through an open circuit, it must be closed.

An open circuit can become closed accidentally if, for instance, a join is made somewhere along the circuit due to wrong wiring or a short circuit. But closing an open circuit can also be managed intentionally or by design using switches, fuses, and circuit breakers.

So an initially open circuit can become closed by wrong wiring, a short circuit, by turning the switch on, if a new fuse is inserted, or if the circuit breaker is switched on.

What Happens When a Circuit is Opened or Closed

I will show you what happens in the case of a lighting circuit with one or two switches.

A Circuit With One Switch

A simple circuit with only one switch can only be connected in series with a load, such as a light bulb.

This circuit arrangement is common in high-power circuits when we must be sure an appliance, such as a water pump motor, is controllable by a single switch.

A Circuit With Two Switches

A circuit with two switches also has practical applications.

What happens when a circuit is opened or closed depends on whether the circuit is complete or incomplete and whether it is a series or parallel circuit.

Consider a circuit with two switches, as may be found at the top and bottom of a staircase, to control a single light bulb. The table below considers all four possibilities for each circuit type.

For a staircase, you need to be able to turn the light off from either the top or bottom switch, so you can see that a parallel arrangement is the most suitable one.

We can consider different aspects to understand the difference between a closed and open circuit in more detail. These differences are summarized in the table below.

The voltage (or potential difference) across the break in an open circuit will be equal to the supply voltage and is considered non-zero, but it would be almost zero in a closed circuit.

We can also show another difference in resistance using Ohm’s Law (V = IR). An open circuit will be infinite due to the zero current (I = 0), but in a closed circuit, it will depend on the extent of the current (R = V / I).

So a circuit is only complete or functional if it is closed, not if it is open.

Besides having a complete and uninterrupted route for current to flow, a closed circuit requires the following elements:

If all these conditions are met, the electrons will be free to flow through the entire circuit.