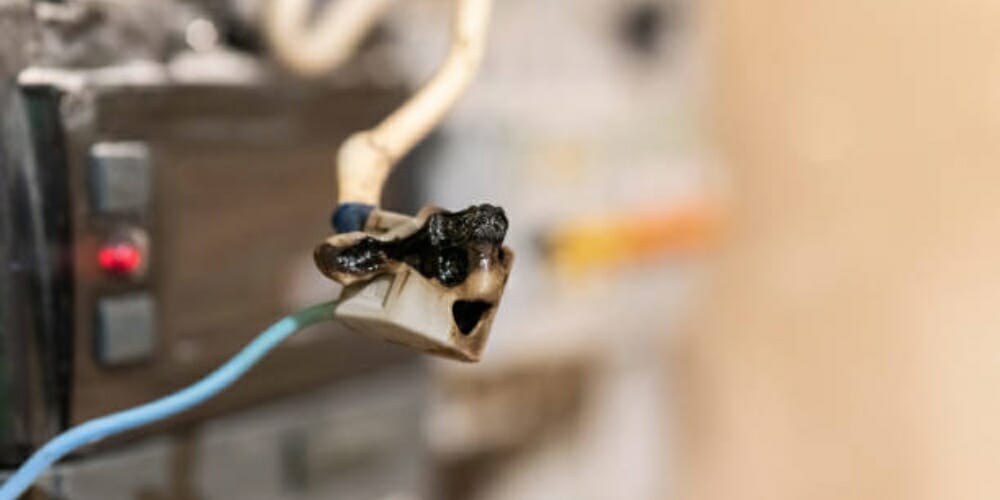 You might know that a short circuit trips a fuse or breaker, but what is it, and how dangerous can it be?

A short circuit is an electrical malfunction that can cause serious damage.

A short circuit occurs when electric flow takes a shorter route than normal, causing a dangerously high level of current, and with it the risk of burning the circuit and creating a fire.

Besides explaining what a short circuit is, and telling you why it is dangerous, I will also tell you briefly about ways to prevent it, to avoid those dangers in your home.

What is a Short Circuit?

A short circuit occurs when an electric flow of charge comes across a route that is shorter than the normal one.

It can happen if, for instance, a wire is loose or damaged, or if wrong wiring leads to a direct connection without a load in between. These situations create an opportunity for the current to take the path of least resistance. When it does, the current bypasses the normal route to take the shorter one, hence the name ‘short circuit’.

There are three types of short circuits in AC circuits: normal, ground fault, and arc.

They are described briefly to show how wrong or faulty wiring can cause a short circuit. In either case, the cause is the wiring creating a condition of direct and unwanted contact. It creates a path of least resistance, high current, and a fire hazard.

This direct connection between the live and neutral causes a large amount of electricity to flow along a short path without passing through any load.

A ground fault short circuit occurs when a current carrying live wire comes into contact with a grounded part of an appliance.

This type of short circuit can result in a current of a few amperes to as much as the maximum possible short circuit fault current.

An arc type of short circuit happens when electricity jumps from one wire to another through the air.

This might seem strange, but it can happen if there is a break in the wire or the wire has melted.

What Causes a Short Circuit to Occur?

I described three types of short circuits, but what creates the conditions for them to occur?

A situation in which a short circuit can occur usually arises as a result of worn insulation, accidental contact, and wrong wiring. So, it can be caused if, for instance:

So there are two main causes of short-circuiting: breakdown of the wiring insulation, loose wire connections, and faulty wiring.

I will describe each of these in a bit more detail.

When electrical wiring gets old or suffers from some damage, the insulation around the wires weakens or degrades, causing them to become exposed.

This increases the chances of a short circuit occurring. It can happen either to the wiring supplying the power or to the wiring inside the appliance. Once plugged in, both become part of the same circuit.

If there are any loose connections in an electrical system, they make it possible for a live wire to connect with a neutral one, creating a short circuit.

There can also be a loose connection inside a power outlet. If it is damaged, it can cause a short circuit when an appliance is plugged in.

Wiring is faulty when it is not done properly or according to wiring codes and regulations, and a short-circuit path is created.

This can happen during installation or repairs, and either by someone who didn’t know how to wire properly or by an electrician by mistake. Usually, it happens inadvertently, but it could also be done deliberately so that when the appliance is turned on, a short circuit occurs.

Why is a Short Circuit Dangerous?

A short circuit can be very dangerous.

In fact, it is more dangerous than an overload because the damage done by a short circuit happens almost instantly, as soon as electricity flows through the circuit, for instance, when the power switch is turned on.

During a short circuit, the electrical current can get extremely high. In fact, it can become hundreds to thousands of times hotter than the normal operating current. If it is a high-level short circuit, it can even go up as much as 30 to 200 kA.

Needless to say, this situation can have serious consequences.

Consequences of a Short Circuit

A short circuit must be interrupted immediately if possible.

This emergency action could minimize the damage if you manage to do it in time. Here are some examples of the damage that can happen:

Here are yet more potential consequences: (1)

“Short-circuit currents flowing through earth can induce impermissible voltages in neighbouring metallic pipelines, communication and power circuits. Unsymmetrical short-circuits cause displacement of the voltage neutral-to-earth and are one of the dominating criteria for the design of neutral handling. Short circuits stimulate mechanical oscillations of generator units… causing problems of stability of the power transfer which can finally result in system black-out.”

Ways to Interrupt a Short Circuit

A short circuit can usually be interrupted by turning the appliance off, switching the power outlet off, unplugging the appliance, or switching off the circuit breaker. The last option, if you can easily do it, is probably best because it will terminate the supply to the entire circuit, and you might not know where the short circuit occurred.

Ways to Prevent a Short Circuit

Briefly, here are some ways you can prevent a short circuit.

Also, to prevent a short circuit from occurring accidentally, you can choose to reduce your electrical usage during storms, and from time to time, check the circuit breakers in the breaker panel to ensure they are all working normally.