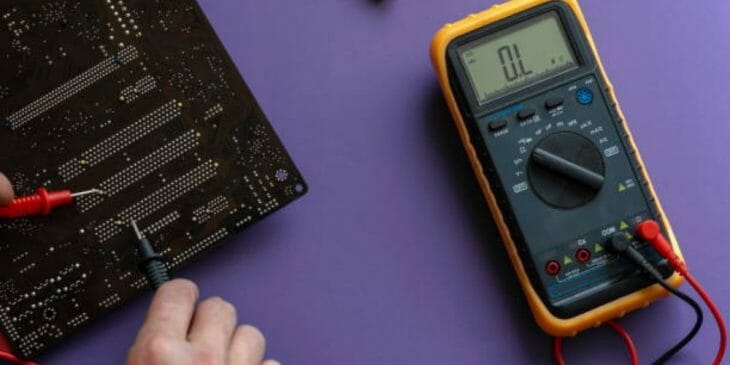 What does a multimeter OL reading mean? It is a common question you’ve most likely encountered with the “OL” reading when using your basic multimeter.

In general, the OL reading(Short for Open-Loop) on a multimeter denotes:

As we proceed, we will go into an in-depth review of what OL means on a multimeter.

OL Reading on a Multimeter

It is an acronym for “open loop,” referring to the lack of a feedback mechanism. This word refers to any circumstance in which you are attempting to measure an electrical signal without using a feedback circuit. Hence it applies to a wide range of devices.

OL may have a different connotation. However, it is another way of expressing that there is insufficient continuity. It may also refer to an over-limit for voltage and current flow measuring.

If the test is not recognized, the screen will display one or OL (open loop). It means that there is no continuity. There is no way for an electric current to pass from the probe to probe if there is no path for it to go.

If the frequency is shallow, the screen will display one or OL, indicating that it is out of reach or overloaded. It will not harm or damage your multimeter but recommend adjusting the dial.

If the element or circuit you’re measuring does not have continuity, the screen will display one or OL. As a result, it possesses infinite resistance.

When measuring high-current circuits, the screen will indicate I or OL if your basic multimeter is overloaded. It is useful when testing an engine.

Therefore, an OL reading during any electrical test would suggest something went wrong depending on your scenario. Either the continuity of the elements being inspected or with the excess current.

Infinite Resistance on a Multimeter

As previously discussed, OL occurs in the meter if the resistance is limitless. It indicates that the measured component has no electric current flowing through the element or circuit. By using a multimeter, you can do an Ohms resistance test.

As an example, consider the pipe. You can use resistance to calculate the amount of water flowing through a pipe. Because a blocked pipe has higher resistance, less water flows through it. An obstructed pipe that does not allow water to flow through, on the other hand, has a high resistance. It is known as infinite resistance. (1)

When measuring electrical current, multimeter tests do the same thing. If the meter’s ohms resistance test is too high, it will be unable to detect any current. It will display “OL,” which stands for open loop. When this happens, you’ll need to lessen the resistance—either wiping the probe tips or using unique probes.

OL and 0 in Testing Resistance

“OL” means “open-loop.” It signifies that the multimeter cannot measure a resistance value lower than it presently has. The meter attempts to display this measurement, but because it cannot show a high number, it indicates “OL.” It can occur while measuring extremely tiny resistances or when using a low voltage in the circuit being examined.

0 can be observed in an open circuit when there is no connection between two terminals. No components are attached to an analog input pin on a microprocessor. In certain meters, it appears as “L.” An “O” open circuit is one in which continuity has been interrupted due to a break in the current flow route. A closed-circuit is complete and has good continuity all the way through. A closed-circuit creates a complete path for active energy to travel from source to load. (2)

However, if you place that identical circuit on a breadboard, the results may vary. It depends on how many resistors are plugged into the alligator clips at each end. If 0 ohms were present, they would behave like wires and link those two pins together. It would result in no connection and your meter reading “0” or open circuit.

Below are some other multimeter test learning guides that we’ve written. You might want to check or bookmark them for later reading.