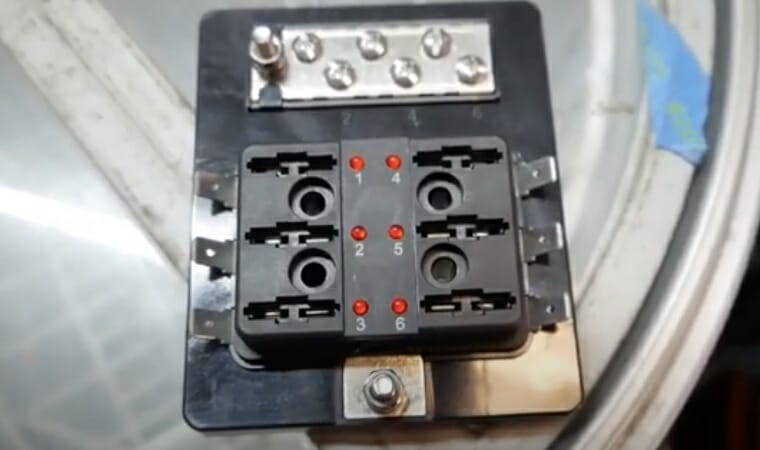 Wiring an auxiliary fuse box in a car is complicated work. Most car owners hire a professional to do it however the standard cost of wiring a car fuse box is pretty high so hiring an expert is not ideal if you are currently on a minimal budget.

Working in the electric industry I have wired fuse auxiliary fuse boxes before and I’m going to help you today with this step-by-step guide.

In general, here’s how to wire an auxiliary fuse box:

Utilizing open gaps in your vehicle’s fuse box is one of the best ways to gain access to the electrical system. Keep in mind that you will need a source of 12-volt DC power if you’re installing electrical components to your vehicle.

Things You Will Need

Due to the fact that this approach partially utilizes the original wiring from your car, you should only use it to add connections that use less than 10 Amperes of current. For circuits that require larger currents, such as audio amplifiers, you must run a separate wire from your battery’s positive terminal to the equipment.

Also, don’t forget to install an auxiliary fuse block close to the auxiliary power source. To avoid short circuits, always use wires and switches that are the proper size and protect your wiring:

Finding your fuse box should be your first priority. Many contemporary cars feature many fuse boxes, which you can find either inside the dashboard or beneath the hood. You can locate it by consulting your owner’s manual.

Open it, then remove each fuse individually using your fuse removal tool. Set your multimeter to 20V DC, attach the negative wire to your automobile’s body, and then check the voltage on both pins.

Search for an “open” fuse slot when you open the fuse block box in your vehicle. This is an energized fuse spot but not attached to any of the car’s electronic or electrical systems. If you’re unsure which slots are accessible, review the owner’s manual—it will detail each fuse placement and its purposes.

Remove splices, taps, and unnecessary wires. You may use a marker or add some tape to mark them.

Now, start extending your wires until you reach the trunk. You may use another wire to make the connection long enough to reach the back. Make sure to use a wire that is capable of withstanding the auxiliary power to avoid short circuits.

Then, cover your wires to add protection to them.

Check your fuse tap to see what kind of wire connectors it accepts. As its name implies, the fuse tap replaces a fuse in the fuse box to gain access to the vehicle’s electrical system.

Any electrical or electronic equipment you are attaching will have a power cable that you will attach to the connector on the fuse tap. The fuse tap often uses a straight sliding connector, but to be sure, check the tap and its manual.

Using a pair of wire strippers, remove 1/2 inch of insulation from the wire that will be attached to the fuse tap. Then, put the proper wire connector onto the wire. Using a crimp tool, secure the connector into position.

Step 5: Wire the Relay and the Fuse Box

It would be best if you made a connection from the relay switch (white) to the fuse that regulates the cigarette lighter in your automobile in order to activate the relay. The relay switch will be an AMP circuit breaker and will be flipped when your keys are in the on position, supplying electricity to your auxiliary fuse block boxes.

After you wire the AMP circuit breaker relay, connect it to the fuse box. Wire the constant fuse box directly to the positive on the battery.

Step 6: Wrap Your Wires and Test

Install heat shield sleeves or wiring protection that can tolerate direct contact with surfaces that are extremely hot and is flameproof. It would be best if you invest in wires made from a substance designed primarily for use in automotive underhood applications and able to endure continuous temperatures of up to 125°C or 257°F.

Selecting the right heat shield sleeve is essential for engine bay wiring. Continuously being exposed to excessive heat can cause physical degradation in wiring over time, which might result in electrical issues. The wire’s electrical resistance might also decrease due to the heat exposure, which might impair the performance of your electric components.

Check to see if everything functions as it should and secure the cables.

What functionality does a car’s fuse box accomplish?

Your automobile fuse box operates to safeguard every electrical circuit in the car. These electrical circuits include the primary computer, the engine, the gearbox, as well as parts like the lights and windscreen wipers. (1)

Do cars have multiple fuse boxes?

Two fuse boxes are standard in most automobiles. One is used to safeguard engine parts such as the cooling system, the anti-lock brake compressor, and the engine management unit. You can find it installed in the engine compartment. The other is frequently located on the driver’s side in or beneath the dashboard in the cabin section, protecting interior electrical components. Numerous fuses and relays are in the fuse box, which shelters them from the weather.

Is it necessary to replace my car’s fuse box regularly?

Replacement of a car’s fuse box is not required or recommended unless the vehicle has suffered significant physical harm or has electrical issues.

What is a car auxiliary power outlet?

An automobile auxiliary power outlet (also known as a car cigarette lighter or auxiliary power outlet) is originally intended to power an electrically heated cigarette lighter. It has evolved into a de facto standard DC connector for providing electrical energy for portable gadgets used in or near a car directly from the vehicle’s power systems. These include electric air pumps, cooling fans, and power inverters. (2)