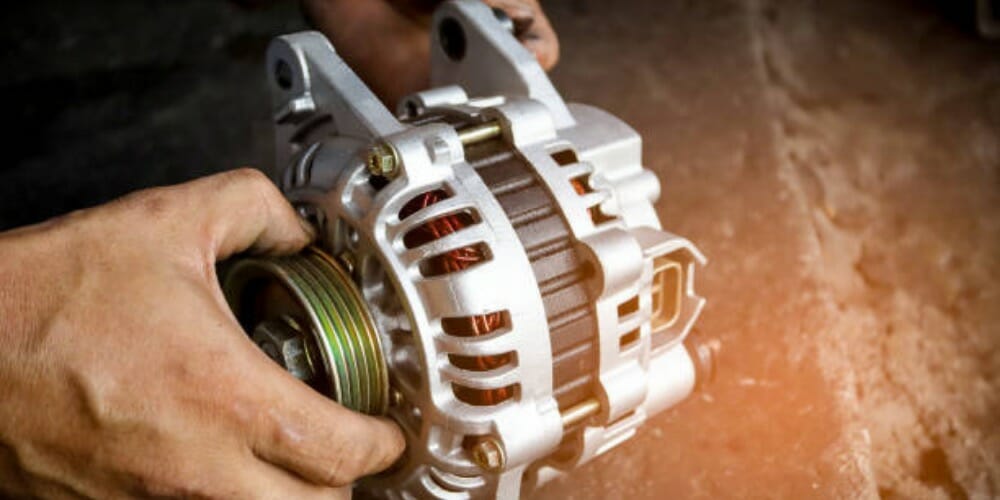 An alternator is a converter that transforms mechanical energy into electrical energy. You can find it in engines in automobiles. Its primary function is to continuously charge the battery while the vehicle is running in order to maintain battery voltage regulation.

How do I test an alternator with a multimeter is one of the most often asked questions:

A multimeter is what you need for the alternator test. It is a handheld instrument that you may use to measure various values such as voltage, current, resistance, and so on. This is why it is considered one of the essential pieces of equipment for electricians. You can find multimeters in various places, including online and in local auto parts or hardware stores.

If you need to remove the batteries from your automobile, you’ll also need sockets and wrenches. That is why I also highly recommend carrying a basic tool kit with you to reach all of the necessary items.

The following is a guide to determining whether or not your car’s alternator is in good working order:

Professional automotive electricians use different methods to inspect the quality of car alternators. Attach the multimeter’s red probe to the positive alternator terminal and the black sensor to any metal element near it, such as a bolt or other object, if you can quickly access it. You can alternatively attach the black probe to the battery’s negative pole. (1)

Various factors can cause faulty alternator voltage, ranging from low rpm to chain or pulley problems. It could be a problem with the voltage regulator on the alternator. If you’ve checked everything and discovered nothing, it’s time to replace your car’s alternator.

Signs that your Alternator is Bad

It’s critical to monitor your car’s performance to determine whether something is amiss with its internal system. The indicators of a defective alternator are listed below:

The Lights are Either Extremely Strong-Or Pretty Dim

Check the alternator if it is in good working order, and it delivers the necessary voltage to run electrical equipment. It indicates that there is an issue if it provides more or less than the amount needed. The lights in your car may become too bright or too dim. They may also fluctuate, which is an indication of a malfunctioning alternator.

The Battery Does Not Receive a Full Charge

An alternator’s work is to keep the battery charged. A vehicle’s battery may be dying if it has been overworked or has passed its expiration date. It can also go dead if the alternator isn’t supplying enough power.

The Car is Making Growling Noises

A car can make different types of noise. Some are normal, but others signal a problem with the internal system. A faulty alternator might make growling noises. It commonly happens when the chain that turns the alternator’s pulley becomes misplaced.

Electronic Components or Systems That are Slow

It could be a bad alternator if the car’s air conditioning isn’t working, the windows are taking a long time to slide up or down, and other gauges aren’t working. The majority of current automobiles come with a priority list. It indicates which attachments will lose support first if the alternator fails.

The Engine Has Difficulties Starting

When alternators stop working, engines frequently have difficulties starting. Stalling on a regular basis is another symptom of the same issue.

The Noxious Odor of Burning Wires

If your engine emits a horrible odor of burnt wires, your car’s alternator may malfunction. This odor is frequently produced when the chain that pulls the alternator pulley warms up or begins to wear off. If the alternator’s pulley is jammed, it will emit the same odor. An overworked alternator produces the same smell.

Why Should You Fix/Replace a Bad Alternator?

When a car’s alternator fails, it can cause various problems for the vehicle. A faulty alternator, for example, might degrade battery performance and potentially cause destruction. In the event of a sudden break, an alternator with a weak or rotating belt may cause harm to other engine parts. (2)

The inadequate voltage output of the battery may occur as a result of the alternator’s poor performance, posing a risk to the vehicle’s headlights, audio or video devices, and other components.

You may check below other multimeter learning guides we’ve written. We hope these helps you! Until our next article!