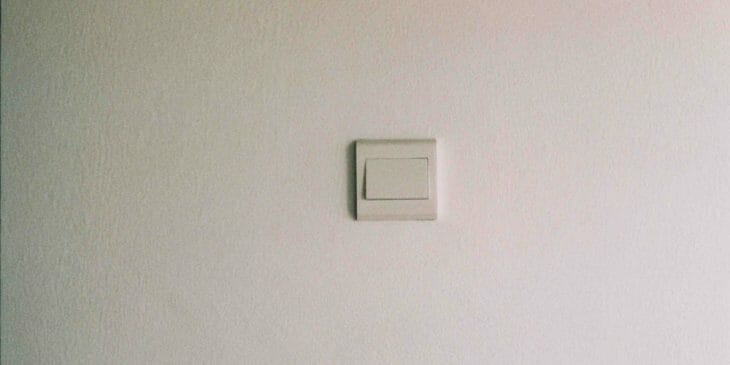 People use their light switches thousands of times every year. It’s natural for them to wear out or deteriorate over time. There’s no need to be worried if you believe you have a faulty light switch.

You have the option of calling an electrician or testing the switch yourself. I’ll teach you the latter.

In general, to test a light switch with a multimeter, follow these steps:

Fortunately, checking a light switch is simple if you have the right tools.

The following is what you will need:

Step #1: Turn Off The Power

Turn off the correct circuit breaker in your home’s main distribution panel to turn off the electricity to the light switch circuit. If you live in an old-fashioned residence with a fuse panel, completely detach the corresponding fuse from its socket.

Always verify the power connections before detaching the wires and unplugging the switch because the service panel index or circuit labels are frequently mislabeled.

Loosen the switch cover plate bolts and lift the cover plate off to reveal the switch wire. Use a non-contact voltage tester to examine each wire in the electrical panel without touching them.

Additionally, examine each switch’s side terminals by touching them with the tester’s tip. Proceed to the service panel and switch off the appropriate breaker if the meter detects any voltage (lights up or buzzes), then repeat until no voltage is detected.

Types of switches include:

The fact that switches come in various types is a point to consider when evaluating them. This is why we must first determine which type we are dealing with.

There are a few ways to determine which type of light switch you have:

Step #4: Unplug and Detach the Switch

Remove the wires by loosening the terminals’ screws. These will bring the switch to a stop.

Put the switch on your work surface to test it. Before removing your light switches, you might want to clean them.

Step #5: Perform a Continuity Test on the Switch

You will need a continuity tester to do this. Luckily, this is also possible using a multimeter.

Continuity testing differs depending on the switch type. That’s why we’ve divided them into categories and described each one separately:

First, take the tester and connect one of the wires to a terminal. Get the probe and attach it to the other terminal. To light up the tester, flip on the switch.

If it lights up, it signifies the switch is in good shape and is functioning properly. The contrary indicates that the switch has failed. Replace the light switch if this occurs.

Connect the black wire of the continuity tester to the com terminal. This section is identical to the previous one. After that, connect the probe to a traveler terminal. To measure the voltage, you should use a multimeter.

Inspect to see if the light comes on when you turn on the switch. Test the other terminal if it does. It isn’t accurate if both of them don’t light up. Detach the run-down switch and replace it with a new one.

These switches have four terminals. It can be puzzling at times, but it isn’t overly complicated. All you require is a small amount of attention.

Attach the testing wire to the attached dark terminal first. It would be best to connect the other wire to a light-screwed terminal. Flip the switch on and off.

For one position, you will have continuity. If you see both or none, it may not be very accurate. Connect to the other terminals and repeat the process when you’re finished.

You should detect continuity in the opposite position this time. If this does not occur, the switch is most likely defective. If you obtain a different reading, replace the switch.

Step #6: Replace or Reattach the Switch

Connect the circuit wires to the switch. Fasten all screw terminals and ground screws tightly after that.

If you’re replacing the switch, follow the same steps. Simply ensure that the amperage and voltage are equal. When you’re finished, return everything to its original location.

After reinstalling the fuse or resetting the circuit breaker, restore power to the circuit. Verify to see if the switch is working properly. (2)