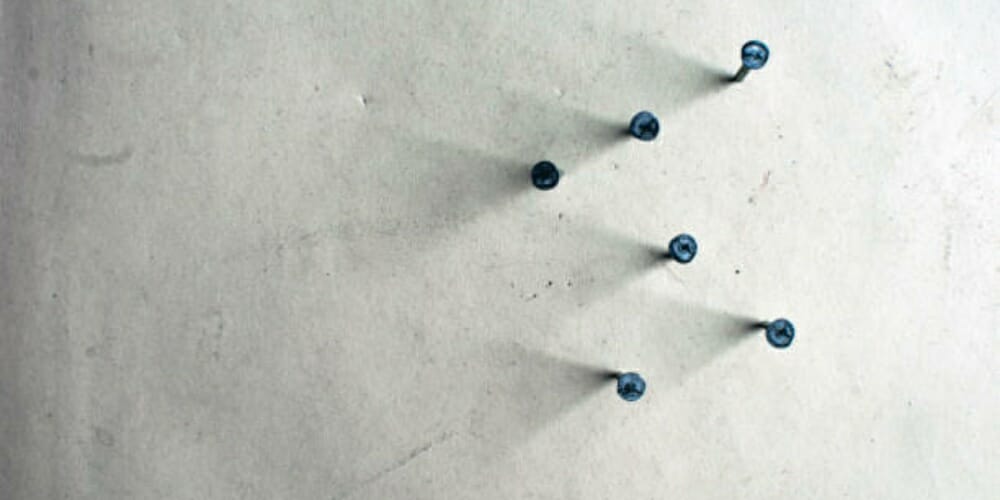 If you’re in the middle of a project and your nail is stuck in the wall, and you don’t have a hammer to pull it out what should you do?

Some nails can be difficult to remove, while others may be loosely held and easy to pop out. You can still remove them using several tools and hacks without a hammer. I have been a handyman for years and assembled a few tricks in my article below. Depending on how strong or tightly held the nail is, you can use these simple methods to remove them.

In General, there are several techniques you can use to remove stuck nails from a wall without a hammer:

Let’s go into this in detail.

Method 1: Use a Flathead Screwdriver

You can easily remove stuck nails from a wall without a hammer with a flathead screwdriver.

Removing nails this way is not particularly hard, but you need some knowledge to pull out a stubborn or deeply embedded nail from a wall. You may damage the wall layers, especially if it’s made of plywood if you don’t pull out the stuck nail properly.

A Flathead screwdriver is the best screwdriver that you can use to pull out stuck nails without a hammer.  It is particularly useful when the nail’s head flushes the wall surface.

Here is how you should remove the nail with a flathead screwdriver:

Step 1. Incline the flathead screwdriver close to the nail’s head on the wall.

Step 2. Incline the screwdriver at a 45-degree angle against the wall surface by raising it gradually, taking care not to slide off from the 0.25 or 0.5-inch position.

Step 3. You can now apply pressure on the nail’s head to pull it out.

Be cautious not to injure your fingers while applying pressure on the nail.

Method 2: Use a Butterknife

Kitchen tools like a butterknife can help you pull out stuck nails from a wall. I prefer a butterknife because it is short and sturdy over a regular knife that is long and floppy.

It’s best to use a butterknife, especially if the head of the nail is thin. That will prevent collateral damage to the wall. The knife will work best if the nail is barely sticking out.

Step 1. Grab your butterknife and slide it below the surface of the nail’s head until you feel it under the head of the nail firmly. You may test it by attempting to pull the nail out.

Step 2. Once you have established a firm grasp on the nail, apply some force and pull the nail out steadily.

If the nail is too big and fails to come out try using a chisel in the next technique.

Method 3: Use a Chisel to Pull a Stuck Nail from a Wall

Chisels are sturdy tools that you can use to remove nails embedded in various types of walls.

You can even use them to pull out nails from hard wall surfaces like concrete walls.

This type of technique is viable if the nail’s head is relatively large and strong. Thin nail heads can fling open, jeopardizing the whole process. So, ensure the nail’s head is sturdy before deciding to use a chisel to pull it out.

To pull out the nail:

Method 4: Use a Fork

Yes, a fork can work just fine. However, the nail has to be a small gauge otherwise, your fork will bend and fail in the process.

The fork applies the same mechanism as the hammer’s prongs, only that they are not as strong, and pivoting is unnecessary. You cannot pivot a fork because it is not sturdy and will immediately bend upon pressure by hand.

The procedure is quite straightforward:

If the nails are too big or tough to pull out with the other methods, you can always rely on the pry bar tool.

A pry bar is a perfect example of a heavy-duty tool for taking out stuck nails and other materials of the kind.

A pry bar is an L-shaped metal with a flat chisel on one end. Here is how you use a pry bar to pull nails out from walls:

In the process of removing the nail, it may pop out forcefully and accidentally jump into your eyes or any other part of your body. So, ensure you prevent such incidences by screening off vulnerable areas of your body. (1)

Step 2. Insert the flat end of the straight side underneath the head of the nail.

Step 3. Use your free hand to hold the middle bar in the middle area.

Step 4. Use a strong piece of metal or wood to strike the bar on the opposite side to pop the nail out. (You can use your hand if nothing can be found)

Sometimes, we are caught off-guard with nothing else but a coin or a pair of keys. But you can still use them to remove stuck nails from a wall.

However, the nail must not be very strongly or tightly gripped or submerged in the wall for this trick to work. And be careful not to hurt your hands in the process.

The process is easy:

For the key to be useful, it must have considerable size and flat edges. Round-tipped keys might not work.