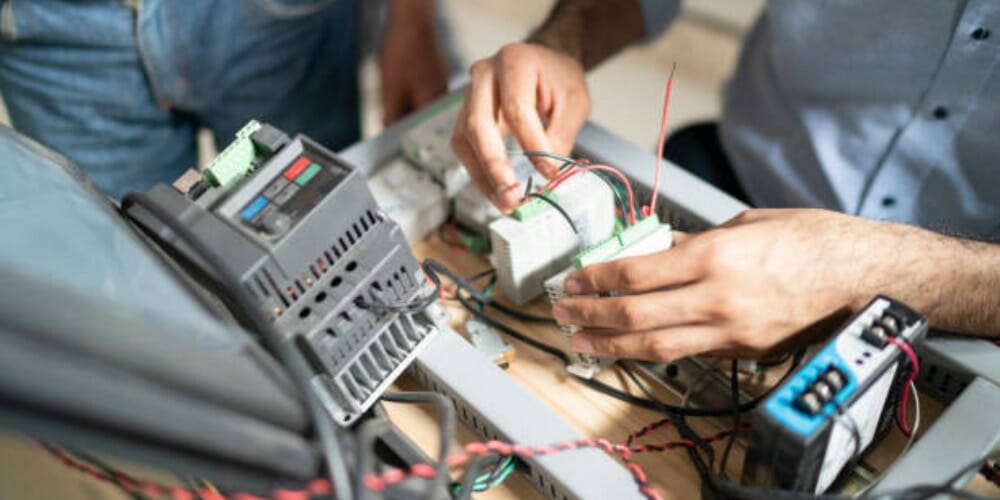 When it comes to home wiring, is it possible to have two circuits sharing a neutral? We go into more detail and explain.

Neutral wires are sometimes shared for convenience and savings, as it is technically possible. But it is not a recommended practice and is probably not permitted by your local codes. There are several disadvantages to sharing it. You won’t be able to use an AFCI or GFCI on such a circuit, it can create a risk of electrocution and fire due to high current flow, and current may still flow while switched off at the panel, unless a two-pole breaker is used.

There are certain situations in which a shared neutral (multi-wire branching) is not uncommon.

One such situation is a multi-wire branch circuit in which two live wires share a single neutral. It might be seen, for example, in some kitchens and older houses. This arrangement is usually made to save on the copper wiring and keep the number of electrical wires to a minimum.

Regardless, this effect is that you get two circuits at one point. This circuit arrangement is called a multiwire branch circuit, which is defined as (for a single phase):

What You Should Do If You Share a Neutral

If you have the situation described above where a neutral is being shared, you must adjust the main panel.

Because two circuits are involved in a shared neutral situation, you should bond the two circuit breakers for those circuits. This is necessary to ensure both are either on or off simultaneously. It should not be possible for only one or the other to be on or off.

To be extra safe, if both circuit breakers are in the off position, don’t automatically assume there is no voltage in the two circuits. You should test them so that neither is life.

Warning: The risk of sharing a neutral is when the circuits sharing it are disconnected. While this is done, and they are not properly disconnected, the appliances on those circuits could get damaged, and the wiring can catch fire. Therefore, both circuit branches must be disconnected simultaneously.

Places that share a neutral, for example, to reduce wiring, usually have more than one ungrounded conductor to support multi-branching.

Installing a two-pole circuit breaker might be a good idea when sharing a neutral.

The two connected circuits will be treated as two separate branches or legs of a single circuit by installing a two-pole circuit breaker. Also, you can easily switch the whole two-branch circuit on and off with a single breaker. This is better than sharing a neutral or bonding the two circuit breakers.

For example, if the two legs draw the same current, say 6A each, then no current will pass through the neutral. But if one draws, say, 6A, and the other draws 3A, then the difference of 3A will be returned through the neutral. This happens because the current takes the path with the lowest impedance (shortest conductor).

Warning: If sharing a neutral on the same leg using two circuit breakers, the return current could get quite high. If this current exceeds what the wires can tolerate, this situation could create a fire hazard.

Why is a neutral connection even necessary?

Neutral connections in our AC electrical circuits are necessary to complete them. They provide a pathway for the current to return, enabling the switch to retain power while turned off. Without it, the current breaks and cannot return to its source, which could cause a high accumulation of electrical charge.

Technically, you can share up to 3 circuits on a single neutral wire if you have a 3 phase system. In this case, you will need to bind the three circuit breakers together.

What type of circuits can or cannot share a neutral?

It is best NOT to share a neutral if the two circuits are dissimilar. The risk, again, is if one circuit is opened and the other is closed, as this would still allow electricity to pass through the combined circuit.

What does the NEC code have to say about sharing a neutral?

The NEC code does not permit sharing a neutral.

It is also technically possible for electrical circuits to share multiple neutral wires, but this is not recommended. There will likely be a difference in current flows between them. Also, never tie different neutrals together. Otherwise, the current overload could cause a fire outbreak. If you need to do this, it must only be done at the panel where the circuit is completed.

Disadvantages of Sharing a Neutral

After reading this far, you may have gathered that although it is possible to share a neutral, it is not recommended. These are the main reasons why:

In short, sharing a neutral is not recommended due to high current, electrocution, and potentially a fire risk. For safety reasons, using only one neutral per circuit is best.

Another reason why sharing a neutral would not be a good idea. It is to do with the magnetic field.

Consequently, if the live wires are in a steel conduit, they could become life, and if they are in a plastic conduit, it could potentially lead to a fire outbreak.

After reading the above recommendations not to share a neutral, you still want to do so; here are some tips for doing it safely to minimize the risks.