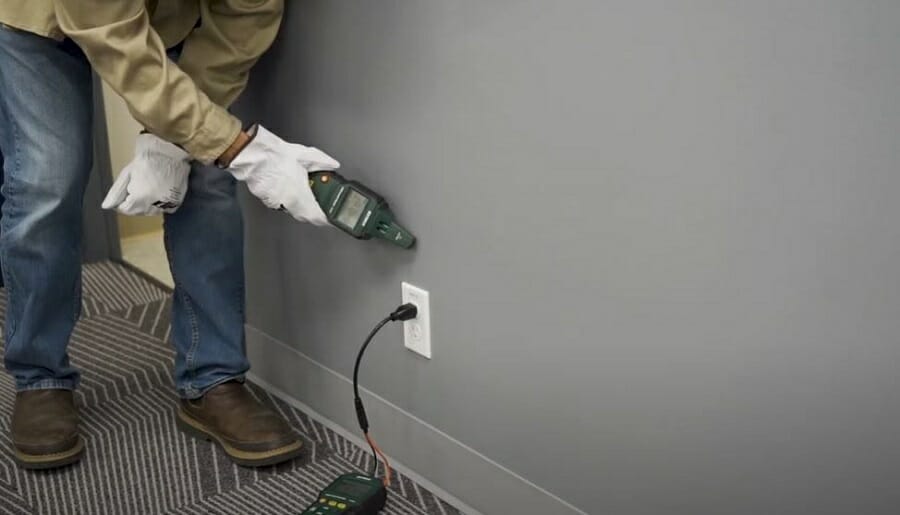 In this article, you’ll learn three ways to trace a broken wire without damaging the wall.

It is never safe to have a broken electrical wire in a wall, ceiling, or floor. For instance, a broken wire might electrify parts of your house and start an electrical fire. To avoid this, you should trace the broken wire and fix it soon as possible.

Generally, to trace broken electrical wires in a wall, follow these three methods.

I will cover these techniques in more depth below.

3 Methods to Trace a Broken Wire in a Wall

Method 1 – Use an Inspection Camera

Without a doubt, this is the easiest method to trace broken electrical wires. These devices come with a tiny camera connected to a flexible pipe. You can manure around the camera inside the wall because of the flexible pipe.

All you need to do is find a hole and insert the camera and the pipe. If you cannot find a hole, drill a new one suitable for an inspection camera’s size.

Then, guide the camera alongside the wires. Check the screen for any broken wires.

Even though this method is quite simple, there are a few disadvantages to it.

Quick Tip: Most inspection cameras come with a small light. So you can inspect the dark areas without much trouble.

Method 2 – Use a Magnetic or Electronic Stud Finder

Among the many tools that can be used to trace electrical wires, the stud finders are one of the best. For instance, you can use a magnetic or electronic stud finder.

The magnetic stud finders can detect metal nails. So, if you can detect any nails close to the electrical wires (inside the wall), those nails might have caused the broken wire. For proper checking, follow these steps.

Important: Using the magnetic stud finder is not the best way to check for broken wires since it only detects metal nails. After detecting, you’ll have to use another method to inspect that location’s wiring.

If you can detect any broken wires in the wall, access that area and confirm the issue.

Method 3 – Use a Cable Tracer/Wire Locator

Using a cable tracer is the best method among these three methods. It will provide better results than the previous two methods.

There are two types of wire locators.

This cable locator emits a tone when navigating the probe alongside the correct wire path.

Signal cable locators display a strong signal when navigating the probe alongside the correct wire path.

You’ll get a better idea of these two cable locators from the below respective guides.

Tracing Broken Wire in a Wall with the Tone Cable Locator

For this demonstration, assume you are checking the wire connection from Outlet-A to Outlet-B. And you don’t know whether the electrical wires are broken or not. So, you will use the tone tracer to detect any broken wires.

Step 1 – Get the Wiring Diagram

First and foremost, acquire the wiring diagram. It will give a clear idea of how the electrical wires travel in the walls. For instance, you’ll know whether the wires travel in a vertical or a horizontal line.

Then, locate the two outlets you check for broken wires in the wiring diagram. At first, understanding the wiring diagram might be a little tricky. But you’ll get it eventually. After all, you only need the direction of the wires.

Quick Tip: If you are having trouble reading the wiring diagram, get help from an electrician.

Step 3 – Identify the Electrical Wiring Path in the Wall

Next, crosscheck the wiring diagram and the wall and get a rough idea about the path of the electrical wiring in the wall (from Outlet-A to Outlet-B).

Step 4 – Cut Off the Main Power

Never use the tone cable locator on live wires. It will damage the device. Cut off the main power before starting the tracing. Or turn off the respective circuit breaker.

As you can see, three sets of wires are in Outlet-A. And each set has a black hot wire, white neutral wire, and bare copper wire (ground). You’ll have to check all these wires.

But first, group them appropriately. That way, you won’t check two wires in two different connections by mistake.

Now, take the tone cable locator and examine it. This device comes with three parts.

The Toner grabs the signal that comes from the probe, and the probe is used to detect wires. Lastly, alligator clips connect to the wires that you want to check.

Go to Outlet-A and connect the alligator clips to the hot and neutral wires (choose any wire set from the three).

Then, turn on the toner and probe.

Afterward, go to Outlet B and place the probe on each wire. The two wires that emit the tone loudly should be the wires that connect to the alligator clips.

If none of the wires emits a tone, those wires are broken.

If Outlet B gives a positive result (the wires aren’t broken), you can further test those wires using the probe.

Take the two wires and insert them into the two holes located on the probe. The wire connection is not broken if the probe lights up the yellow indicator light.

Follow the same process as in steps 6 and 7 for all the other wires.

Assuming you have a broken wire connection during step 7. But you need to know the exact location of the broken wire (in the wall). Otherwise, you might end up damaging the entire wall area. So, here is a simple solution.

First, identify the path of the electrical wire (you already know that from steps 1,2, and 3). Then, run the tone locator alongside the wire path. The location where the tone is weak might be the place with a broken wire.

Using a signal cable locator is the same as the above 8-step guide. The only difference is that this device gives you signals instead of tone.

If the signal strength is between 50-75, it indicates properly connected wires.