Over the last two decades, I have worked on various electrical projects where I have gotten shocked many times.

Getting an electrical shock is not a pleasant experience. But is there a way to touch a live wire without getting shocked? Yes, there is and I’m going to talk about that and more in this article.

In general, as long as you follow these steps, you won’t get shocked.

However, following these two steps are not practical for some situations.

We’ll go into more detail in our article below.

How to Identify the Live Wire?

In a single-phase connection, there are three wires.

In a three-phase connection, there are five wires.

The ground and neutral wires are the same as the single-phase connection. But there are three wires carrying the load; black, red, and blue.

Is There a Way to Touch a Live Wire Without Getting Shocked?

Yes, there is a way to do that. To safely touch a live wire, you should follow these prerequisites.

You won’t get shocked while touching the live wire when the above conditions are met.

When you touch only the live wire, the path of the current won’t be completed, given that you aren’t connected to the ground. There are a few ways to avoid ground connection.

Plastic, cotton, wood, and rubber are electrical insulators. They don’t conduct electricity in any manner. That doesn’t mean you are completely safe while wearing rubber shoes.

For instance, if your rubber shoes contact water, you’ll be grounded. Water is an excellent conductor of electricity. So, you might end up shocked or electrocuted. In this situation, the electricity will enter your body and it will use the ground as an alternative path.

Can I Get Electrocuted Without Touching the Ground?

Yes, you can get electrocuted without touching the ground.

If you touch both the live and ground wire at the same time, you’ll create an alternative path for electrons to travel. So, the electricity doesn’t need the ground. It enters your body from the live wire and will exit from the ground wire. Depending on the load, you might get electrocuted or shocked.

Keep in mind: You might get shocked if you touch the live wire and the neutral wire at the same time.

Things You Should Know About Electricity

In this section, I will explain static and current electricity.

All the stuff around us is made from atoms. These atoms are tiny particles that only can be seen with the help of a microscope. For instance, you can find these atoms in your body, smartphone, or clothes. However, these atoms are not the smallest particles. They are made up of three different types of things.

Electrons have a negative charge, and protons have a positive charge. Neutrons don’t have any charge. Also, an atom has a similar number of electrons and protons.

Simply, these are the building blocks of the universe. So, there is not much difference when it comes to electricity.

The static electricity becomes active when the amount of proton and electron are not equal. For instance, one extra electron can cause trouble. Unlike protons and neutrons, electrons like to move around.

When you touch an object, the electrons will travel from your body to the object and you might get a little shock.

However, this object should be a conductor. These conductors have a positive charge. For instance, Copper has an extra two protons. That is why we labeled it as Cu+2.

The current electricity has lots of electrons ready to jump. These electrons are always trying to get back to their source. So, when you touch an electrical wire, the electrons travel through your body to reach its source. They use the earth as an alternative path to travel.

This process leads to shock or electrocution.

Why Birds Don’t Get Shocked While They are on Electrical Fences or Power Lines? 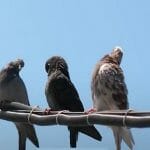 Even though electrical fences and power lines are designed to release electrical shock, a bird stands on these electric wires quite comfortably.

Can I Use an Insulated Plier to Touch Hot Wire? 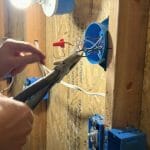 Yes, you can. The plier should be properly insulated.  Only touch one wire at a time. Also, make sure that the insulated area is not damaged.

Can I Wear Rubber Gloves to Touch a Live Wire?

You can wear rubber gloves or shoes to protect you from electrical shock. But the built material should be 100% pure rubber. Apart from that, the rubber gloves shouldn’t have any tears or holes on them.

Is Wood an Electrical Insulator?

Yes, wood is a good electrical insulator. So, if you touch a live wire while standing on a wooden surface, you won’t get shocked. However, you might get shocked under the following circumstances.

– If the wooden surface is wet.
– If you touch the live wire and the neutral or ground wire at the same time.

Touching a live wire is dangerous. Even if you are not grounded, things might go wrong. Whenever dealing with electrical projects, you should take electrical safety seriously. It might prevent disaster. (2)