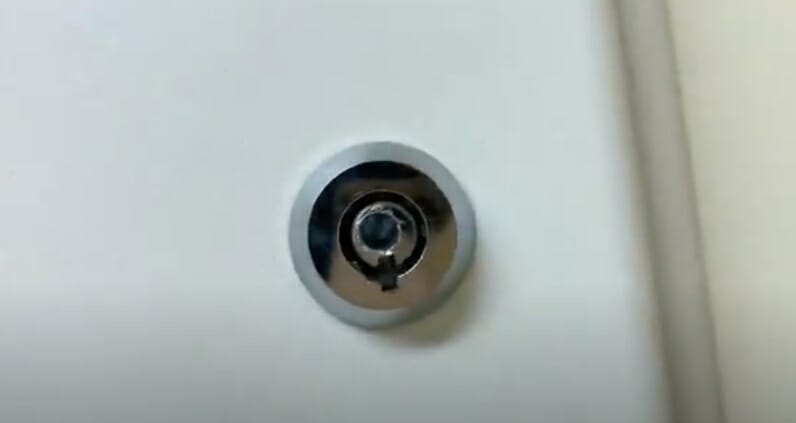 I’ll teach you how to drill out a tubular lock quickly in this article.

As a handyman, I have been on a few calls where I have had to drill one of these. Drilling a tubular lock will take 5 to 10 minutes, as long as you follow my directions properly and have the proper tools to make it happen. This technique can be great, especially if you’ve lost your key.

In general, to drill out a tubular lock, you just need to:

Procedure: How to Drill Out a Tubular Lock

To avoid damaging the thing you’re drilling into, measure and wrap ¼ inch of masking tape around the drill bit at its tip.

This is only to ensure that the drill bit does not go too deep and destroy the machine’s inner parts.

Step 2: Make a Hole in the Lock’s Center Using a Smaller Drill Bit

Make sure to put on your safety goggles before you start drilling. Using a ⅛-inch or smaller bit, drill into the center of the lock. This will be your starting hole.

As much as possible, drill until it is at least ¼ inch deep. Stop when you reach the tape’s end.

Step 3: Apply a Larger Drill to Make a Second Hole Adjacent to the Already Completed One

To damage the lock’s internal mechanisms, a ¼ inch drill bit is required. Begin boring the second hole in the initial one you made.

A ¼-inch deep hole is generally enough to open the lock. However, sometimes you’ll have to bore up to ⅛ inch deep to get to the pin that unlocks the lock.

If the lock does not open after several tries, insert a flathead screwdriver into the hole you drilled and twist it until you successfully remove the lock casing.

Are Tubular Locks Easy to Pick?

While tubular locks are very strong and resistant to many forms of attack, they can be vulnerable to some lock-picking techniques. However, with the proper tools and knowledge, tubular locks can be picked relatively easily.

The first step in picking a tubular lock is to insert a tension wrench into the keyway and apply pressure. This will allow you to turn the plug when the pins are properly aligned. Next, insert a pick into the keyway and gently move it up and down until you feel it catch on a pin. When you feel the pin catch, apply pressure to the tension wrench and turn the plug until you hear a click. Repeat this process for each of the pins until the lock opens.

With the proper tools and knowledge, tubular locks can be picked relatively easily. However, it is important to note that tubular locks are still very strong and resistant to many forms of attack. If you are unsure about your ability to pick a tubular lock, it is always best to consult with a professional locksmith.

Tubular keys are not universal, meaning they can only be used with tubular locks with the same keyway. This is because the tubular key is designed to interact with the pins in a way other keys cannot. While creating a universal tubular key is possible, it would be very difficult to do so without compromising the lock’s security.

How Does a Tubular Lock Work?

Tubular locks work using a series of pins aligned with the keyway. When the correct key is inserted into the lock, the pins will line up in a way that allows the plug to be turned.

However, if an incorrect key is inserted, the pins will not line up correctly, and the plug will not be able to be turned.

Are a Pin Tumbler and a Tubular Lock the Same?

How Much Power is Required to Drill out a Tubular Lock?

A corded or cordless drill with at least 500 watts of power is enough.

What are the Most Common Uses for Tubular Locks?

They’re often used on vending machines, coin-operated washers and dryers, and some bicycles.

Are Tubular Locks Difficult to Drill Out?Yes, but it’s not recommended. A corded drill will provide more power and will make the job easier.

They’re not difficult to drill out, but they require some practice. It can be challenging if you don’t have the proper tools or are not familiar with how to use them.

Can I Use a Cordless Drill to Drill out a Tubular Lock?

Yes, but it’s not recommended. A corded drill will provide more power and will make the job easier.

What Type of Drill Bit Should I Use to Drill Out a Tubular Lock?

What are Some of The Most Common Reasons Why Drill Out Tubular Locks?

The most common reasons are because they’ve lost their keys or they’re trying to open a locked vending machine.

Tubular locks are not difficult to drill out, but they require practice and the proper tools. It can be challenging if you don’t have the proper tools or are not familiar with how to use them.