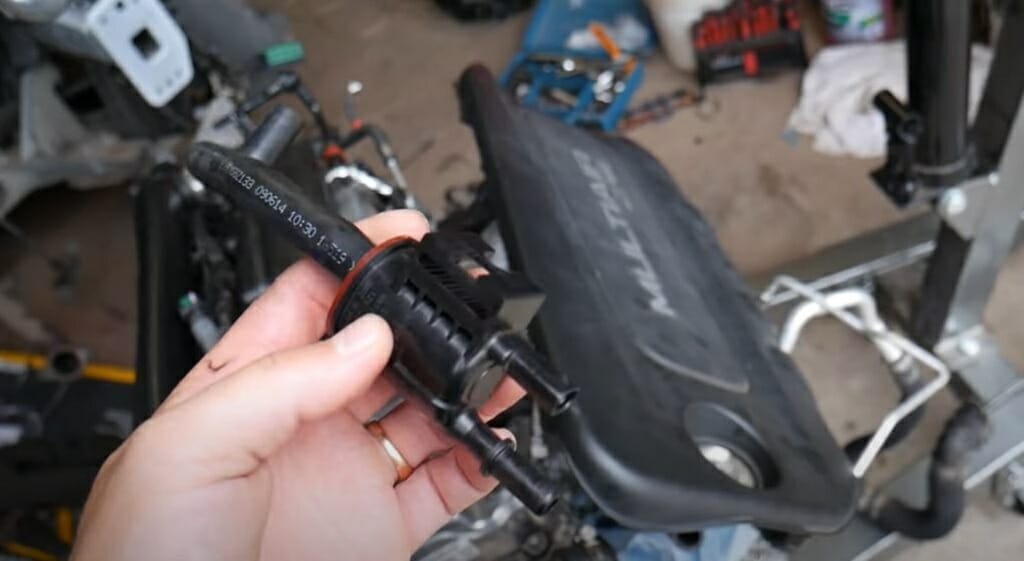 Engine misfires can cause your vehicle to start and stop suddenly. It is the worst thing that can happen to you while driving. And eventually, it might damage the engine or it could result in a road accident. Either way, the outcomes are not good. Sometimes, faulty spark plugs and ignition coils can be reasons for the misfire.

In general, a bad purge valve can cause an engine to misfire. The purge valve is a significant part of the vehicle’s EVAP system, and a malfunctioning purge valve won’t be able to recycle the fuel vapor into the combustion chamber. Hence, the engine will start to misfire.

Read the below guide for a detailed explanation.

Can a Malfunctioning Purge Valve Cause Engine Misfire?

Yes, indeed, it can. When the purge valve is bad, it won’t open up promptly to let the fuel vapor go to the combustion chamber. Hence, the charcoal canister will start to fill up with excessive fuel vapor. And this excessive vapor will flood the engine cylinders.

When that happens, the engine will have to burn an abnormal amount of air and fuel mixture, resulting in the engine misfiring. Read the below section to understand this process correctly.

Need to Know Things About EVAP Systems and Purge Valves

To understand how can bad purge valve can cause a misfire, you’ll need a basic knowledge of an EVAP system and purge valve.

First, know that the purge valve is a part of the EVAP system. EVAP stands for Evaporative Emission Control System and is responsible for preventing fuel vapor from escaping into the atmosphere.

Tip of the Day: Automotive industry first used EVAP systems in the 1970s.

Here is a more straightforward explanation to better understand the EVAP system and the purge valve.

Imagine a situation where your vehicle is parked outside at noon. Due to the heat, a portion of gas inside the fuel chamber will vaporize. This fuel vapor can easily escape into the atmosphere. When that happens, you can expect two outcomes.

In my opinion, both outcomes are extremely expensive. Hence, to prevent the escape of the fuel vapor, EVAP systems are installed in every automobile these days.

Role of the Purge Valve

You already know that the purge valve is a part of the EVAP system. But what does it do?

Well, let me explain it to you. A few things prevent vapor from escaping into the atmosphere when fuel vapor is created.

As you already know, when the EVAP purge valve malfunctions, the above fuel-vapor burning process gets disturbed, resulting in an engine misfire.

So, how can I know for sure?

The vehicle’s computer will display error codes with the check engine light. The following codes are for a bad purge valve.

If the above codes display in the vehicle’s computer, most of the time, it could be an indication of a bad purge valve.

Also, the P0441 and P0455 codes indicate a malfunctioning EVAP system, which could result in a major leak.

Quick Tip: Whenever the dashboard displays a check engine light, you should never ignore it. Do a proper inspection and find the issue as soon as possible.

As you already know, an engine misfire is another symptom of a bad purge valve.

This misfire could happen often and will start and stop your vehicle randomly. Also, this is one of the most dangerous situations you can be in during driving. It might lead to a road accident. Or it might damage the vehicles engine.

Spark plugs are responsible for supplying the spark needed to ignite the air/fuel mixture.

When the EVAP purge valve fails to complete its duty (redirecting fuel vapor into the combustion system), the engine will have to burn the excessive air and fuel. This process creates lots of heat. And the heat wears out the spark plugs. So, the spark plugs’ life span can be reduced significantly.

Identify and fix a bad purge valve early to protect your spark plugs.

If you are having a hard time starting the engine, it could result from a bad purge valve. A faulty canister purge valve causes an unbalance in the engine air-fuel ratio. This unbalance directly affects the starting process of the engine.

Quick Tip: If the engine is not starting properly, never force it to start. This could damage the engine. Or, in a worst-case scenario, you might have to replace the whole engine.

An emission test measures the level of pollutants in the vehicle’s exhaust. These pollutants can be a hydrocarbon, carbon monoxide, oxygen, or any oxides of nitrogen.

Every vehicle needs to pass the emission test. To pass that, the components of your vehicle should work perfectly—especially the parts in the engine. When the purge valve is not working correctly, the car’s exhaust will release different types of gases that can pollute the atmosphere. This process releases many harmful hydrocarbons into the atmosphere.

And all of these harmful gases will be identified in an emission test that your vehicle won’t be able to pass.

Nowadays, most vehicles’ speed average between 600 RPM and 1000 RPM. This is the idle speed range. But when your vehicle is idling rough, it won’t run smoothly. For instance, the RPM value will go down. It might drop below 600 RPMs or go up above 1000 RPMs.

Rough idle is another symptom of a bad purge valve. A vacuum leak might occur if the valve is bad and it remains open. And this leak will affect the idle speed of your vehicle.

So, keep the purge valve in good condition to maintain your vehicle’s idle speed.

The gasket is an insulator located between the cylinder head and cylinder block. It prevents oil leaks and protects the radiator channel. Also, the vehicle’s gasket is an excellent shield for the combustion chamber (it prevents oil from entering the chamber).

When the purge valve is closed, it won’t allow the fuel vapor to pass through and will stop the recycling process. Because of that, a large amount of fuel vapor gets collected inside the system, creates a high-pressure level, and blows up the vehicle’s gasket and rubber seals. This damage will result in an oil leakage into the engine compartment and emission system. Eventually, this situation can get serious if you don’t fix it. It is vital to identify and fix this issue soon as possible.

Can I Fix a Faulty Purge Valve?

If you detect the above-discussed symptoms, you might be dealing with a bad purge valve. But I would recommend you confirm this issue first. There are two ways to approach this.

Option one requires some level of skill and knowledge about automobiles. You can often find the best method to test the purge valve in the vehicle’s service manual. Here is a simple explanation of the testing process.

The purge valve should close with no voltage and remain open when the voltage is applied. This is the simple principle behind this testing process.

The purge valve is located in the engine bay and connects to a hose that links the canister and the intake. In some models, you can find the purge valve close to the fuel tank. If you cannot locate the purge valve, refer to the vehicle’s instruction manual. Knowing the location of the purge valve will speed up the testing process.

However, if you aren’t comfortable with such a testing process, choose option two and hire a mechanic to test and fix the purge valve. Fixing the purge valve is inexpensive, and an experienced mechanic will do that in no time.

Replacement Cost of a Purge Valve

If the purge valve is damaged beyond repair, you’ll have to replace it with a new one. Knowing the replacement cost will help.

Quick Tip: According to the merchant, the price might vary. It might go up or down slightly.

Can My Car Start To Shake Because of a Bad Purge Valve?

Yes, it can shake. The shake will occur mainly during stops. Also, vibration will come from under the hood.

However, the following reasons can cause abnormal shaking. So, it is wise to check them too.

Can a Faulty Purge Valve Cause a Fuel Smell?

The purge valve opens up whenever a large amount of fuel vapor builds up in the vehicle’s canister. Then, the combustion chamber burns the excessive fuel vapor.

However, when the purge valve is faulty, the above process gets shut down completely. And the fuel vapor will discharge into the atmosphere through the exhaust, creating a fuel smell.

Remember that a cracked charcoal canister or bad purge valve might be the reason for this fuel smell. So, if you detect any fuel smells, remember to check these components immediately.