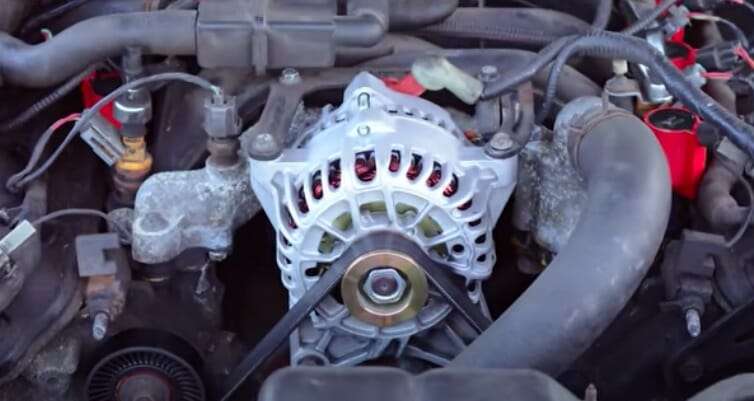 In this article, I will explain to you the exact reasons electric cars don’t need alternators.

Many people wonder if adding an alternator in an electric car would work. The question is fair since alternators help to maintain the car’s battery and charge its accessories. Still, if we look closely into the mechanism, we see that it is impossible.

Electric cars cannot use alternators because they do not have engines. Additionally, an alternator preserves the existing energy inside the car’s mechanism and does not produce any. Thus, an electric vehicle, would not keep up with the energy losses, forcing the car to slow down and finally power off.

What is an Alternator

An alternator is a device that converts Alternating Current (AC) to Direct Current (DC). That happens because the alternator can convert mechanical energy to electrical energy.

It mainly consists of the following parts:

How Does an Alternator Work

You must start the engine for an alternator to work in a car.

The engine receives power from the battery to start up. It then consumes fuel and provides the alternator with mechanical energy.

The alternator and the engine are connected with a belt, which attaches to the pulley wheel. The pulley rotates along with the shaft, which rolls the rotating magnets.

The rotation of the magnets creates a magnetic field that produces electricity. The rotation also forces the current to switch direction quickly and consecutively, alternating the current.

The diodes of the device receive the AC. They force, through their mechanism, the current to obtain a single direction and refrain from altering.

Then comes the regulator. It controls the power of the flow of electricity, so it matches the voltage of the battery.

The direct current goes into the battery to charge it and then to the rest of the circuit so that the car’s system remains powered on, even without the battery’s involvement.

Why Do We Need an Alternator In a Conventional Car

The basic work of the alternator is to relieve the battery.

A mechanism outside the battery allows it to rest while the alternator is in use. The reactions halt, allowing the elements to return to their original state as efficiently as possible.

That helps the maintenance of the battery, as its elements do not wear out.

How Does an Electric Vehicle Work

There are three types of electric cars.

Their key mechanisms are the same, though they differ in a few details.

The differences lie in the charging and energy storage.

Electric Vehicles consist of the following:

The battery pack, else known as a traction battery, is made of lithium-ion cells stacked together. It receives DC power while charging, and it stores energy.

Another part of the energy stored in the battery pack goes to the electric motor, which drives the car’s wheels.

The motor works with alternating current, converted from the direct current by the inverter.

Why Don’t Electric Cars Have Alternators

That energy derives solely from the combustion engine, a device electric cars do not have. However, they have other mechanisms that replace the alternator.

Yet, even if we replaced those mechanisms, it would still be impossible for the alternator to work in an electric car.

We first have to note that energy cannot be created, only converted.

There have been thoughts that describe the usage of alternators in an electric car by the following mechanism; The battery could be used to spin the motor, which could rotate the alternator to produce energy.

This theory could be feasible, but specific laws in physics dictate otherwise.

The alternator utilizes the mechanical energy of the combustion energy. Through the pulley and the magnets, it converts it into electricity. The electricity produced is divided into two portions. One portion is delivered to the other attachments in the car (i.e., stereo) and the other to the electric motor.

The electric motor receives less power and runs slower. Thus, the power that goes again into the alternator is less each time.

As said above, the alternator only converts AC power to DC power. The working process of an alternator shows that its gears exchange energy without increasing or decreasing its amount. It cannot receive a quantity of electrical energy and multiply it.

Consequently, the issue with the mechanism proposed is that the alternator cannot create electrical power on its own.

Another reason why electric vehicles do not have alternators is that they do not need them.

The batteries they use are different from a conventional car’s battery. The batteries of an electric vehicle are multiple cells, one on top of the other. They do not need an alternator to prevent them from running dry.

3. Other Devices Replace the Alternator

Electric cars have devices that convert AC power to DC power and the other way around. They also have multiple ways of storing energy.

Thus, the alternator is entirely replaced by other devices.

What Do Electric Cars Have Instead

Although missing out on an alternator, electric vehicles have other mechanisms that can convert and even regenerate power.

Electric cars can receive either AC or DC power, depending on the charging station.

The electric motor converts the AC power to DC, and the inverter converts DC power to AC. Also, the DC/DC converter must deliver power to both the vehicle’s accessories and the traction battery for storage.

Many electric cars, mostly hybrids, have a mechanism to recharge their batteries.

The process is called regenerative braking and transfers electrical power to the traction battery. While braking, the motor of the car switches direction and generates electricity.

This way, the power is stored in the battery pack while minimizing energy losses.

They cannot create additional energy, only convert it, which is why they cannot be used in electric vehicles. This type of car has additional mechanisms that can convert alternating current to direct current and the opposite if needed.

Their advanced technology allows them to store energy not used at the time for future applications.