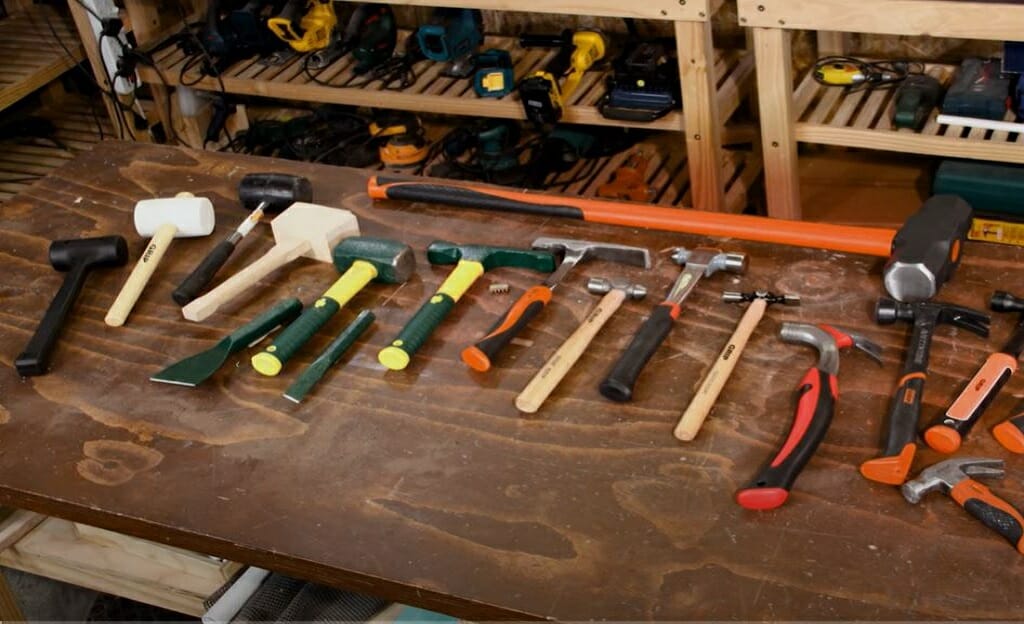 The hammer is one of the most used tools in human civilization.

Our ancestors used it to smash bones or shells to get food. Nowadays, we use it to shape metal and drive nails into objects. But have you ever thought about the origins of the hammer?

Our ancestors used hammers without handles. These hammers are known as hammer stones. In the Paleolithic Stone Age in 30,000 BCE, they created a hammer with a handle that included a stone attached stick and leather strips. These tools can be categorized as the first hammers.

History of the Hammer

A modern-day hammer is a tool that most of us use for striking objects. It could be wood, stone, metal, or anything else. Hammers come in many variations, sizes, and looks.

Quick Tip: The modern-day hammer head is made of steel, and the handle is made of wood or plastic.

But before all this, the hammer was a popular tool in the Stone Age. According to historical data, the first use of a hammer was recorded in 30000 BC. In other words, the hammer has an incredible 3.3 million-year history.

I’ll cover the hammer’s evolution throughout these 3.3 million years below.

Recently, archaeologists discovered the first ever tools used as hammers.

This discovery was made at Lake Turkana, Kenya, in 2012. These findings were made public by Jason Lewis and Sonia Harmand. They found a large deposit of different shaped stones used to strike bone, wood, and other stones.

According to the research, these are hammer stones, and our ancestors used these tools for killing and cutting. These tools are known as embryonic hammers. And they only include heavy elliptical stones. These stones weigh around 300 grams to 1 kilogram.

After that, this embryonic hammer got replaced with the stone hammer.

Imagine a wooden handle and stone connected by leather strips.

After mastering this simple hammer, they move on to tools such as knives, shaped axes, and many more. That is why the hammer is a much more significant tool in our history. It helped us to evolve and understand a better way of life in 30000 BC.

The next advancement of the hammer was recorded in the metal and bronze ages.

In 3000 BC, a hammerhead was forged with bronze. These hammerheads were more durable because of the melted bronze. During the casting process, a hole was created on the hammerhead. It allowed the hammer handle to connect to the head.

Then, around 1200 BC, people started to use iron for casting tools. This evolution led to the iron hammer head. Also, the bronze hammers became obsolete due to the popularity of iron.

In truth, the discovery of steel marks the birth of modern-day hammers. In the 1500s, steelmaking developed into a large industry. With that came steel hammers. These steel hammers were useful for many different applications and groups.

In the 1900s, people invented lots of new materials. For instance, casin, bakelite, and new metal alloys were used to create hammerheads. This allowed people to use the hammer handle and face in different ways.

These new era hammers were created considering aesthetics and ease of use. Many modifications were made to the hammer during this time.

Most leading companies, such as Thor & Estwing and Stanley, were founded in the early 1920s. These commercial companies were focused on creating sophisticated hammers during this time.

When Was the Nail Hammer Invented?

In 1840, The nail hammer was invented by David Maydole. At that time, he introduced this nail hammer, especially for pulling nails.

What is the Use of the Hammer Stone?

The hammer stone is a tool that our ancestors used as a hammer. They used it for processing food, chipping flint, and breaking up bones. The hammer stone was one of the first tools in human civilization. (1, 2)

How Do I Find Out If a Stone Was Used as a Hammer?

The first thing you should look out for is the shape of the stone. If the shape is intentionally modified, you can confirm that the particular stone was used as a hammer or tool. There are two ways this could happen.

– By pounding, someone can alter the shape of the stone.
– By removing small fragments.