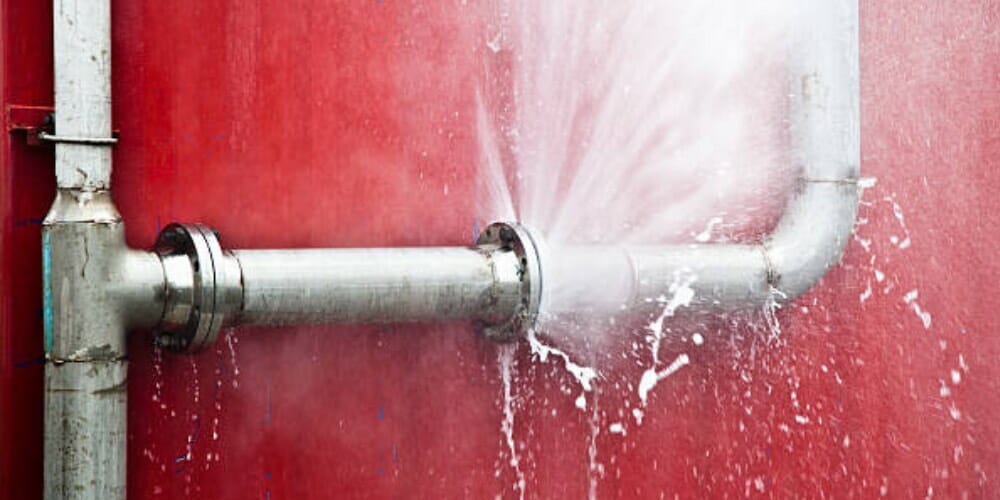 Water hammer may seem mild and like a low-level problem, but it can wreak havoc on your pipes if left alone.

As a handyman, I have faced water hammers several times. The hydraulic pressure due to the interference with the air cushions (designed to alleviate the hammering effect or shockwaves triggered by water hammers) can damage pipes and valves and cause serious issues and accidents. Understanding the danger of the water hammer will fire you up to rectify the issue in time to avoid problems triggered by the water hammer.

Water hammer can cause damages that include but are not limited to:

I’ll go into more details below.

What is Water Hammer?

Briefly, a water hammer describes a knocking-like sound that emanates from inside the pipes or hoses as the water flows.

A water hammer is also known as hydraulic shock, characterized by water surges and shockwaves.

The Mechanisms of The Water Hammer

A water hammer happens when an open water valve in a sprinkler or plumbing system suddenly closes.

As a result, water slams it when the pump abruptly reverses water flow. The impact generates shockwaves propagated at the speed of sound between the valve and the immediate elbow in the system. The shockwaves can also be channeled within the water column after the pump.

Though it sounds mild, water hammer is a concern; do not simply tolerate it as it can cause tremendous problems.

The Dangers of Water Hammer

Water leakage is a big problem, especially if the water flow is metered. You may end up paying insane costs.

Additionally, water leaks may cause mild floods in the house or home compound that may damage electronics, books, and other things in a home.

In small-scale situations, the leaked water increases the risk of slips and concussions due to leaky pipes causing low-level leaks around the house. You may consistently clean these and have them reappear or even ignore them and one day slip over them.

Similarly, the pressure and banging effect of water hammering may erode the pipe.

Issues can result from this effect. For instance, the debris due to pipe erosion can find its way into the human body.

Drinking metallic or plastic shavings can cause appendicitis. Appendicitis is caused by the accumulation of indigestible materials in the appendix. The appendix inflames, and it may result in death.

In some cases, the metal debris is carcinogenic, and one may contract cancer.

A Water Hammer Can Damage Water Fittings and Valves

Your maintenance cost can spiral due to the water hammer. The gushing water can damage the fittings and valves, which are costly.

So be sure to regularly check the condition of your pipes and spring to action whenever you notice mild signs of water hammer.

Water also affects the functionality of the gasket joints and welded sections, and the general integrity of the water system is compromised.

The repeated clamoring sound triggered by the water hammer is irritating.

Many individuals are mentally affected by the clamoring sound; imagine hearing this sound daily and at night, preventing you from sleeping or sporadically waking you up. You may not realize it, but small sounds like this waking you up throughout the night may interrupt your REM sleep which is the state of deep sleep, and cause you to wake up tired and unrested; when compiled over months, this can affect your mental health.

As silly as it may seem, a water hammer is a serious concern.

A case study of the effects of water hammers in paper mills reveals check valve failure; sadly, the problem can spread to another pipeline system within the infrastructure.

Why Are You Hearing Water Hammer?

In a typical situation, you shouldn’t hear the shockwaves because the plumbing system has air cushions to screen off the shockwaves.

So if you hear the shockwaves, issues obstruct the air cushion formations.

Such problems include the following:

Poor installation of plumbing equipment like water taps can result in such a problem. For instance, if you notice a water hammer just after the installation of new equipment, then that’s likely to trigger.

Besides, too old a plumbing system can also fail to cushion the water hammer.

Water with high concentrations of magnesium, calcium, and iron can cause the development of limescale which can build up and eventually hinder the air chambers from draining properly, causing water to hammer. (1, 2, 3)

So, regularly check your pipes and hoses to curb Limescale build-up in your water systems.

You will have a problematic plumbing system if the situation remains unfixed.

Make it a point to inspect your water systems frequently and renovate them whenever necessary to avoid the consequences of water hammers. You can always seek professional service if uncertain or stuck.

I hope this guide is enlightening and a call to action.