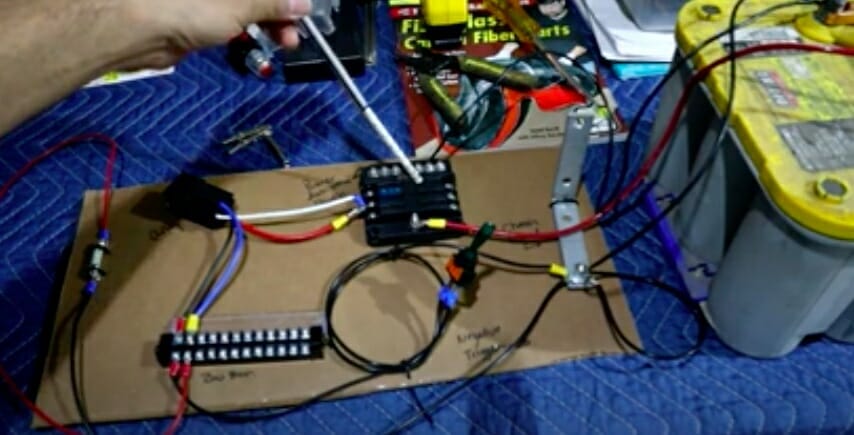 In this article, I’ll teach you how to wire a Power Distribution Block (PDB) to distribute electricity from a single input source to multiple pieces of equipment in your branch circuit.

As a verified electrician, I prefer using PDBs to disseminate electricity from your single input source to multiple devices with a few wires. If you use a PDB, you will spend less money on wires and less time making the connection. Besides, the process is very simple, you don’t need special skills to do the job.

In general, to wire a power distribution block to your single input source, you need to:

How to Wire Power Distribution Block

The following step-by-step guide will help you to understand how to wire your power distribution block easily.

Step 1: Connect the Battery to a Charger

Use a trickle charge to refill your battery. Then, you can assemble all the tools and materials required while charging the battery.

I recommend using a template for the PDB wiring. You can use an online version. However, you may not have access to the exact diagram to wire all the components of the PDB appropriately. So, take a look at the one below:

Adapting a conventional wire code for your PDB is helpful and necessary to limit potential confusion and disasters.

Step 4: Connect the PDB and the Inline Fuse (if you are not using a fused PDB)

First, use a wire stripper to remove the insulation coating of the red wire to about 1 inch deep to get enough conductive surface for the connection.

Now, attach the red wire to an alligator clip and connect it to the positive terminal on the battery. Attach the other end of the positive wire to the Power Distribution Block. The power distribution block is connected to an inline fuse.

The fuse in PDBs guards each piece of equipment. In the event of an electrical fault, the PDB blows up the fuse before any equipment starts a fire.

Now, strip the insulation of another positive wire as before. Attach the inline fuse in the PDB and thread it to the relay station.

Flip the relay to expose the numbered terminals at the bottom part.

Connect a blue wire, and strip the insulation to get enough conductive surface for connection. The blue line will represent the power going out. The blue wire should be situated right on the bump start nut line.

Get a black wire, strip the insulation coating and connect one end to pin or terminal 85 on the relay unit. Attach the other end to the bus bar as shown below:

Next, thread the pin 85 connection from the bus bar to the trigger, then the chassis is connected to the negative terminal pm the battery.

As aforesaid, the Chassis is linked to the battery’s negative terminal. Connect a black wire from the power distribution block to the chassis.

The LED bulb will help establish power flow through the PDB connection system.

Testing is the easiest part. Toggle the switch on and off and observe the LED bulb behavior.

If the LED goes on and off accordingly, your PDB connection is a success.

The following are some of the benefits of working using a PDB:

It is not difficult to connect a PDB once you have a correct connection template or diagram.

It is Cheap and Saves Time

Connecting the PDB involves fewer wires than when using other connectors. Connecting multiple wires is not complicated, and it saves time.

Experiments reveal that even the most secure connection can lose its grip on the block due to nudging forces or vibrations. That may result in serious problems. So, ensure you test all the connections before implementing the PDB. This way, you’ll know if the connections can endure the vibrational forces in various operating environments. (1, 2)