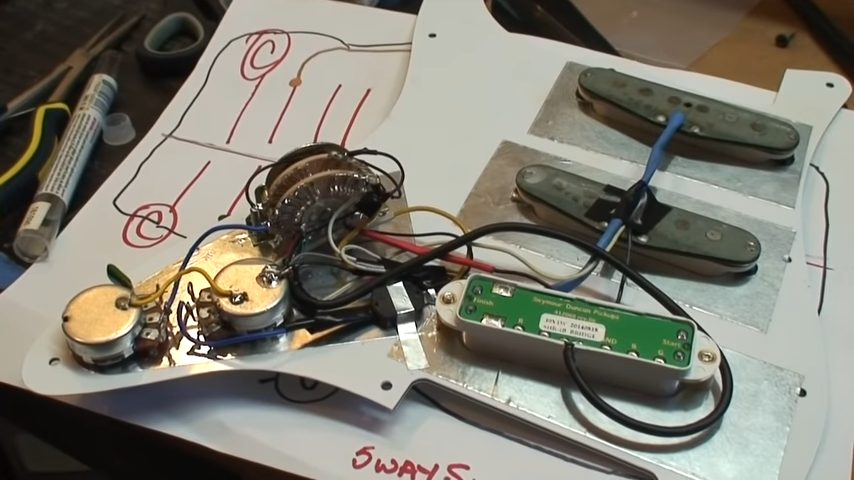 Wiring a 5-way switch can be difficult but by the end of this guide, you should be able to do it without a hitch.

There are two popular versions of the switch: Fenders 5-way switch and Import 5-way switch. Most manufacturers wire the Fender switch to guitars because it is the common one, while the Import switch is rare and limited to some guitars such as Ibanez. Both switches, however, operate similarly: the connections are relayed from one section to another, and then they are mechanically linked within an assembly.

In general, the process of wiring a 5-way switch requires patience and precision.

We will go into detail in our guide below.

Some guitars and basses use a 5-way selector switch. You may find yourself in a situation where you have to replace the existing switch in your guitar; this guide will help you with that. But before that, let’s look at two examples of the typical 5-way switches below:

The Import-type switch has one row of the 8 contacts. It is a rare type of the 5-way switch and it is hence limited to guitar brands like Ibanez.

How a 5-way Switch Works

The two switches are found in several guitars. It is also imperative to know how the switch works in a typical guitar to wire it accurately.

Both the Fenders switch and the Import switch have identical functionality and mechanisms. The main difference is in their physical layout.

In a typical 5-way switch, connections are relayed from one part to another and they are mechanically connected in the assembly. The switch has a lever system that connects and disconnects the contacts.

However, this is not the only way you can wire the 5-way switch.

The History Behind the Development of the 5-way Switch

The first version of the Fender Stratocaster had 2-pole 3-way switches which were intended to contact only the Neck, Middle, or bridge pickup.

So, when the switch moved to a new position, the previous contact was made before the new contact was broken. With time, people realized that if you could place the switch in-between the three positions you could obtain the following contacts: both the Neck and the Middle, or the Bridge and the bridge pickups connected at once. So, people started to place the 3-way switch in-between the three positions.

How to Wire a 5-way Switch

Remember that the two types of switches, Fender and Import, the only difference is in the physical forms of their contacts. Their operational mechanisms or schematics are strikingly identical.

The possible labels for the contacts of 5-way switches could be 1, 3, and 5; with the 2 and 4 in the in-between positions. Alternatively, the contacts might be marked B, M, and N. The letters stand for Bridge, Middle, and Neck respectively.

Step 2: Identifying the contacts with a multimeter

Step 3: The wiring scheme or diagram

You need to have a plausible wiring diagram to know the engagement of the lugs or the contacts. Also, note that four outer lugs are common, wire them to the volume pot.

In position 1, engage the Bridge pickup only. This will also engage the tonne pot.

In position 2, again, engage the Bridge pickup and the same tonne pot (in position one).

In position 3, engage the Neck pickup and a tonne pot.

In position 4, take the Middle pickup and bridge it to the two contacts in the middle position. Then, engage the bridged lugs to position four. So, you will have a combination of the Middle and the Neck pickups in position four.

In position 5, engage the Neck, the Middle, and the Bridge pickups.

Finally, verify the wiring and install the switch in its rightful device, which is often a guitar. Note, if the guitar housing makes weird sounds during contact engagement, you may replace it with a new one. (2)