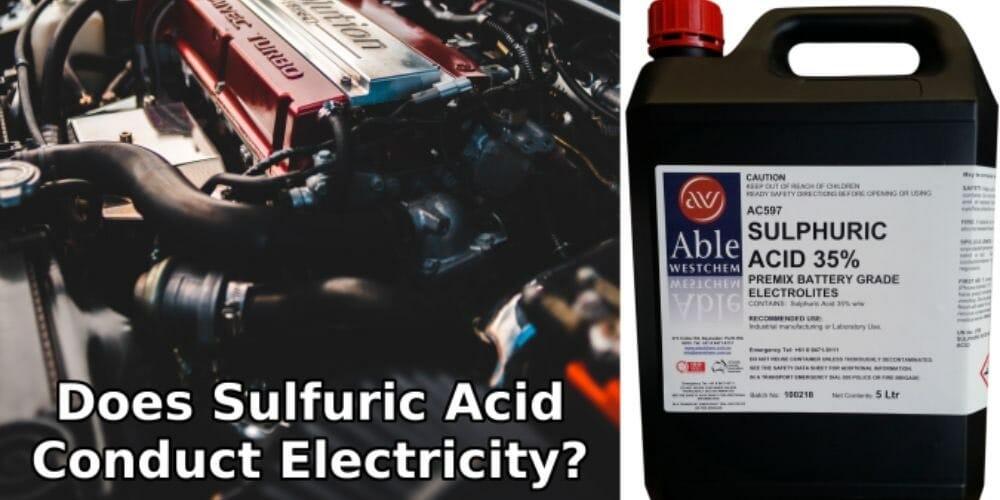 Yes, sulfuric acid conducts electricity very well. In fact, it has special uses due to its high electrical conductivity. However, it is highly corrosive, so it must be used cautiously.

Beware! Sulfuric acid is a highly corrosive substance. It is destructive when it comes into contact with the skin or eyes or if inhaled. Severe exposure to it can even lead to death. Handle it very carefully.

Sulfuric acid, a mineral acid with the chemical formula H2SO4, contains hydrogen, oxygen, and sulfur. It is a colorless, odorless, viscous liquid that is miscible with water. Sulfuric acid’s ability to conduct electricity well is due to a process called autoprotolysis. This is a chemical reaction in which protonation (proton transfer) occurs between identical molecules, allowing for dissociation.

When sulfuric acid is dissolved in water, the solution ionizes by separating into hydrogen (H3O+) and sulfate (HSO4–) ions. It is these ions that carry charges and enable them to conduct electricity. When added to water, it makes sulfuric acid an even better conductor of electricity, which makes it very useful in many ways. Before we explore them, let’s see what difference the concentration makes to how well sulfuric acid conducts electricity.

Uses of Sulfuric Acid as a Conductor

Safety precautions are essential when handling anything that contains sulfuric acid because it is hazardous and highly corrosive. It can cause very severe burns, especially if highly concentrated. It is, therefore, critical to wear the following protective equipment:

Sulfuric acid has many uses. For example, it is used in homes as a drain clearer or toilet bowl cleaner. In the chemical industry, it is used to produce glue, detergents, insecticides, and other chemicals; in the military, it is used to make explosives. It also has uses in agriculture, paint, printing, automobile, and other industries. It is a very important commodity.

Most of these uses are related to cleaning, dehydrating, or oxidizing. But sulfuric acid is also very useful due to its electrical properties. This is explored in detail next.

Sulfuric Acid Used as an Electrolyte

One of its most common uses for its electrical properties is in cars and other vehicle lead-acid batteries. In a lead-acid battery, sulfuric acid is used as the electrolyte in a car battery when mixed with water. In this way, not only does it conduct electricity, but it is also capable of storing electrical charge.

As long as a charging voltage is applied to the lead-acid battery, it separates into opposite pairs of ions, i.e., positive and negative. The ions are compelled to separate while the current flows into its positive terminal. In a fully charged state, the electrolyte solution (see picture below) has a high sulfuric acid concentration in liquid form. This stores most of the chemical energy. The battery then discharges while connected to a load. A lead-acid battery helps to start a vehicle with a combustion engine.

Does sulfuric acid conducts electricity or not? We explained that it does so very well. We showed that this is due to autoprotolysis, explained how it can conduct electricity due to the ionization of hydrogen ions and sulfate ions, and that less concentration in water makes sulfuric acid more electrically conductive. Furthermore, we described how sulfuric acid is used as an electrolyte in lead-acid batteries.