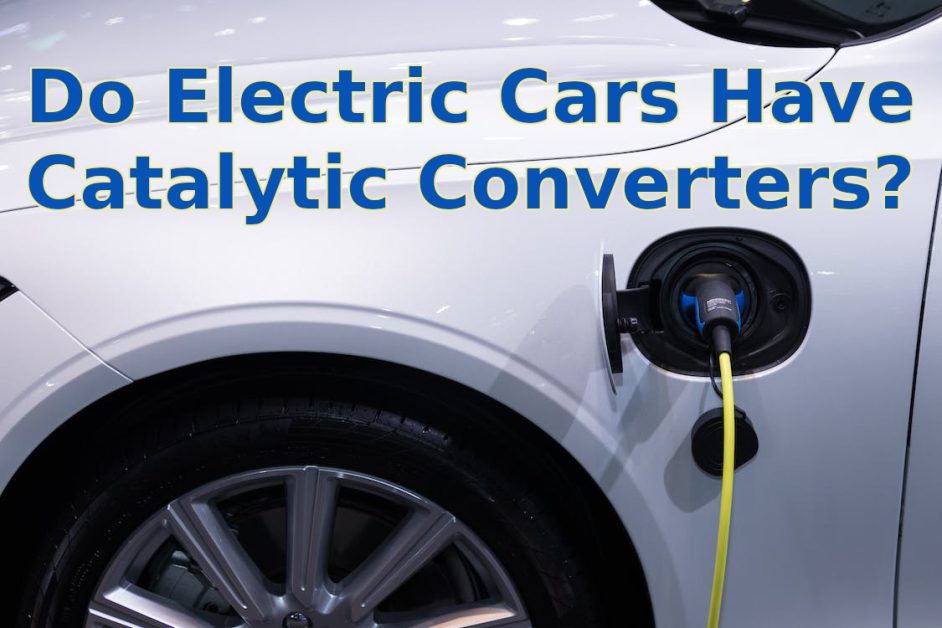 In this article, we explore whether electric cars have or need catalytic converters.

Catalytic converters are a common feature on gasoline-powered vehicles to reduce vehicular emissions. However, electric cars don’t use gasoline, so do they still need them? One might ask this type of question when comparing electric vehicles (EVs) to gasoline-powered ones.

The answer is no, i.e., electric cars don’t have catalytic converters. The reason is that they don’t need them. But why not?

Do Electric Cars Have a Catalytic Converter?

Note: Although this article focuses on electric cars, whether a catalytic converter is needed and other information about them apply equally to electric vehicles in general.

What Catalytic Converters Do

A catalytic converter is a device that helps reduce harmful emissions from a vehicle’s engine. It is added to the vehicle’s tailpipe as part of its exhaust system. Its outer case encloses a catalyst, which converts the incoming gases from the engine (CO-HC-NOx) to relatively safer gases (CO2-H2O-N2) that are then released into the air (see illustration below). [2]

The gases produced by the engine are hydrocarbons, nitrogen oxides, and carbon monoxide. A catalytic converter’s function is critical because carbon monoxide is toxic. The red corpuscles of blood absorb this gas and inhibit the absorption of oxygen, which is essential for sustaining life. [3]

In short, its purpose is to make vehicle emissions less harmful to our health and environment. The final emitted gases (after catalysis) are carbon dioxide, water, and nitrogen. Carbon dioxide is not harmless either, but it is less so than carbon monoxide.

Having a catalytic converter fitted in a vehicle is a legal requirement if the vehicle has a combustion engine. The requirement is checked during emissions testing to ensure it is present and functioning normally.

Besides EVs, off-road vehicles are also exempt from the requirement of having a catalytic converter.

Other Things Electric Cars Don’t Have

There are several things that electric cars don’t have, which explains why they don’t need a catalytic converter. Among them are:

Implications of Not Having a Catalytic Converter

Health and the Environment

Not needing a catalytic converter, because electric cars don’t emit exhaust fumes, makes them more environmentally friendly compared to cars that do, at least in terms of emission of toxic fumes.

There is also another reason why not needing a catalytic converter makes electric cars safer. This safety is from a security point of view. Catalytic converters contain expensive metals, such as platinum, palladium, and rhodium. They help in the filtering process to reduce harmful emissions using a honeycomb structure. They catalyze harmful gases, hence the name catalytic converter.

Given the expected rise in demand for electric vehicles, as replacements for vehicles with internal combustion engines, there will be decreasing demand for catalytic converters.

The present drive is toward creating a cleaner environment. Electric vehicles offer an opportunity to maintain a relatively cleaner and healthier environment by constructing cars that don’t emit harmful gases, which eliminates the need for catalytic converters.

It is likely that within a few years, catalytic converters will become a relic of the past era of toxic-fume-emitting vehicles.

Controlling for Harmful Gases with EVs

EV manufacturers generate a lot of carbon dioxide (CO2) emissions to construct EVs, and the charging grids for charging EVs also still largely rely on non-renewable energy sources. Consequently, the fact that EVs don’t need catalytic converters does not mean we are completely free of the need to control harmful gases.

The main gas of concern is carbon monoxide. The catalytic converter converts this and the other two gases involved (hydrocarbons and nitrogen oxides) into relatively safer carbon dioxide, besides water and nitrogen.

However, we also showed that although it might appear EVs are safer for our health and environment, the emission of carbon dioxide during their production and for charging them still make it necessary to control harmful gases.

Nonetheless, as the use of EVs is likely to grow in the future, it means that the demand for catalytic converters will continue to fall.