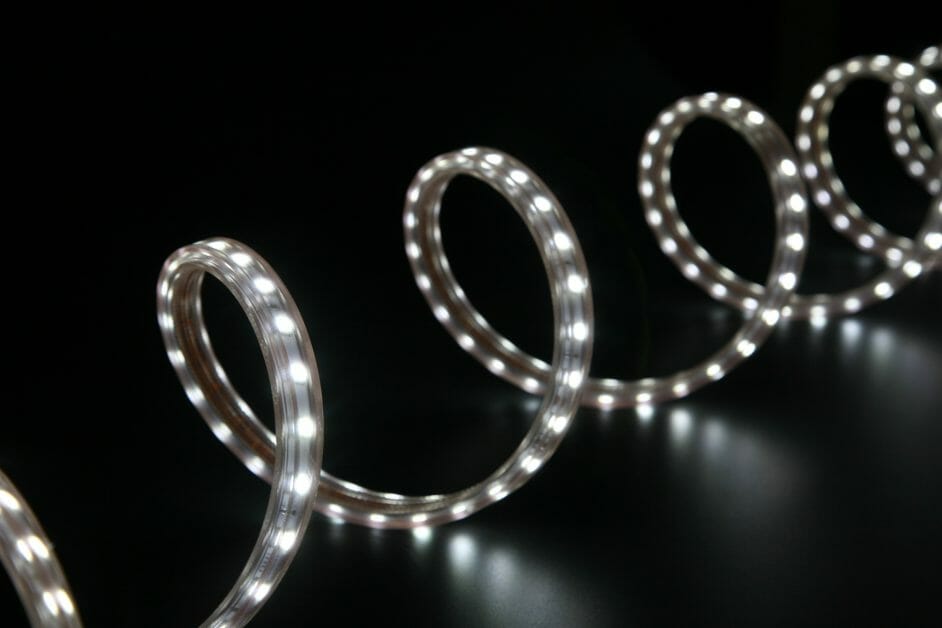 If you’re thinking about using led light strips in your home, it’s essential to understand how much electricity they use.

LED strip lights consume less electricity than standard incandescent lights. A typical 15-foot strip costs less than $11 to operate every year. So you don’t have to worry about leaving your LED strips on all night.

They won’t make a big difference in your electric bill, & they don’t produce much heat that could start a fire.

We’ll go into more detail below.

What are LED Strip Lights?

LED strip lights are a new and flexible way to light a room. Even though these lights come in many different styles, you can generally expect.

How Much Electricity Does an LED Strip Light Use?

If an LED strip light uses less energy than an incandescent bulb, the next question that comes to mind is probably, “How much electricity do these strip lights use?”

The average LED strip light uses about 7 to 35 watts of power. This wattage depends a lot on the product. Strip lights that are better for the environment use very little electricity, while bright, full-featured lights could use almost as much electricity as a regular bulb.

Most lights will use less energy than their maximum capacity. This is because you probably won’t have them on at full brightness daily.

Still, if you buy the brightest strip lights with the most panels, you could use as much as 62 watts if you turn the light on at full power.

LEDs are very good at saving energy. LED lighting turns most of its energy into light rather than heat. This is different from traditional lighting, which uses a lot of heat.

Therefore, LED strip lights use less energy than other types of lighting (such as fluorescent or incandescent) to achieve the same illumination level.

How Long Can Led Strip Lights Be Left On?

Theoretically, you could always leave an LED strip light on, but I wouldn’t recommend it.

Even though it would be cheaper than an incandescent light strip, you would use up many of the transformer’s(power supply) life hours.

If a transformer had time to cool down between uses, it would last longer.
So if you only use your strip lights for 5 hours a day, the transformer will last much longer.

It would help if you also thought about how the heat will dissipate. If you leave a strip light on for a long time, it will make more heat.

If you want to leave a strip light on for longer than a few hours, or even all the time, you’ll need to install a heat sink. This is especially important if the strip is in a room with no ventilation.

So, how much electricity do LED lights use, and how much does it cost?
Let’s look at real-world examples to show how much it costs to run strip lights.

We used the average cost of electricity in the US, which is 13 cents per kilowatt-hour, to make this table (kWh).

A kilowatt-hour is the amount of energy that can be drawn for one hour at 1,000 Watts. So, to convert Watts to kWh, you multiply by the number of hours and divide by 1,000.

That means that even if you run a high-density LED strip for 15 meters and turn it on for an hour, it won’t cost you much more than half a cent.

Let’s see what that means over a whole year, assuming you use your LED strips for 10 hours a day.

So, if you buy a shorter strip light with a standard density, you’ll spend less than $3 for a whole year of regular use. On average, even a long strip with more LED lights costs less than $22 a year or less than $2 a month.

The costs will increase if you want to light up kitchen cabinets, false ceilings, coving, etc.

Light bulbs only last for a certain number of hours, but if you take care of something, it can last for a long time. LED lights last much longer than incandescent lights. The way LED lights are made is a big part of why they stay working so long.

Incandescent Christmas lights burn like embers because an electric current flows through a heated filament inside the bulb.

As more electricity flows through the filament, the light will get brighter, and the filament will then eventually burn out. This breaks the electrical circuit or puts it back together. This means that it’s not hard to burn out your incandescent lights.

Some strip lights are simple and sell themselves as cheaper, while others are more complicated and come with many features. Because of these different ways of thinking about design, the cost of an LED strip light setup can vary greatly.

Popular LED strip lights can cost as little as $15 or as much as $75, depending on how advanced they are.

Most of the time, less expensive strip lights have fewer and simpler features. At the same time, the more expensive options have a lot to offer, such as advanced customization, WiFi, and different color schemes.

Even though each LED strip light uses a different amount of electricity, in general, they are more energy-efficient, cost-effective, and helpful for the average customer than traditional lighting sources. LED strip lights also have other benefits, including a smaller carbon footprint, more customization options, and positive effects on health and mood.