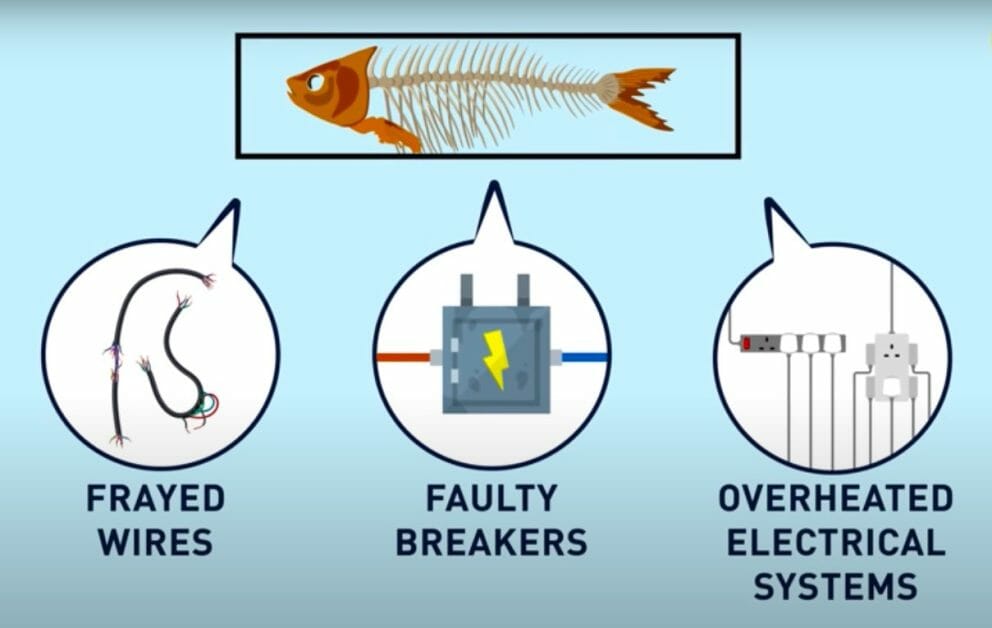 As a certified electrician, I will explain what an electrical fire smells like in this article. Does it smell like fish?

“In general, an electrical fire smell can be described in 2 ways. Some argue that it has the acrid odor of burning plastic. This odor is understandable because plastic components such as wire coatings or insulation sheaths could be on fire underneath the wall. Some people claim that an electrical fire smells like fish. Yes, it’s strange, but when electrical parts overheat, they occasionally emit a fishy odor.”

What Causes an Electrical Fire to Smell?

An electrical fire can occur when a circuit breaker, cable, or electric wire malfunctions or fails.

An electrical fire smell can be described in two ways. First and foremost, some argue that it has the acrid odor of burning plastic. This odor is understandable because plastic components such as wire coatings or insulation sheaths could be on fire underneath the wall.

Yes, it’s a strange fact, but an electrical fire smells like fish. It explains why when electrical parts overheat, they occasionally emit a fishy odor.

It would be preferable if you were concerned with a burning plastic smell rather than a fishy smell. As previously stated, an electrical fire is difficult to detect because it occurs behind walls. As a result, I recommend that you call the fire department as soon as you detect that odor.

Most Common Problematic Areas in Our Homes

Extension cords can be very useful but can also be dangerous if used incorrectly. Extension cords, for example, should not be hidden beneath furniture or carpeting. If you do this, you risk causing a fire. Furthermore, never plug multiple extension cords — also called daisy-chaining.

If your table lamp is overworked, it could catch fire. All light bulbs, like lighting fixtures, have a suggested wattage range. When the recommended capacity of the light bulb is exceeded, the lamp or lighting fixture may explode or ignite.

If the wiring in your home is more than two decades old, it may be time for an upgrade.

As wiring ages, it becomes less capable of handling the electrical load required by today’s homes. Overloading a circuit can cause it to trip the breaker. Furthermore, if your breaker box is as old as your wiring, it may overheat and catch fire.

When your house is around 25 years old, you should have your wiring checked. Typically, only a few breakers or the main panels must be serviced.

Some wirings might have cloth sheathing if your house was built before the 1980s. In that case, current standards should be used to replace it.

Other Indications of an Electrical Fire

Other than the electrical fire smell, there are other warning signs.

Follow this protocol when you suspect a fire in your home: